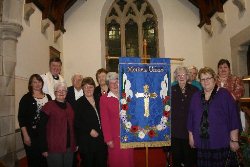 Armoy and Drumtallagh Mothers’ Union dedicated a new banner when they hosted the Autumn Area Service of the North Connor Mothers’ Union at Drumtullagh in October.

This is the first new banner in the parishes since the union was formed in November 1953.

The evening was supported by other branches of the Mothers’ Union including representatives from Ballycastle, Ballymoney, Portrush, Portstewart, Coleraine and Rasharkin. 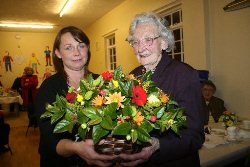 Local officials of the Armoy and Drumtullagh Union who played a role in the ceremony included Beth Hayes, chairperson, Linda Glass and Betty Calvert. Renie Hill, daughter of one of the founding members, was also present.

Also participating in the service were Valerie Ash, Coordinator of the MU Faith and Policy Unit, and Merle McNabb, Area Prayer Representative.

There was acknowledgement of the founder members of the branch – Elizabeth Laverty, Mrs Stewart–Moore, Alice Ferguson, Elizabeth McAuley and Mrs Price.

Those present were delighted to welcome Mrs Maud Cochrane, the oldest serving member, who was presented with a bouquet of flowers by Mrs Hayes. 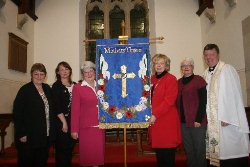