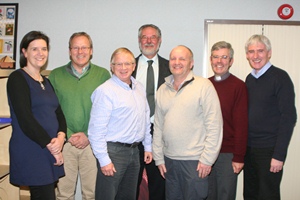 The Connor team that will travel to Yei Diocese in South Sudan met for its first training session at the CMS Ireland offices on Tuesday November 27.

This will be the Bishop of Connor, the Rt Rev Alan Abernethy’s first visit to Yei. A partnership between Connor and Yei was established in 2007, and was renewed for a further five years at Connor Diocesan Synod in October.

Opening the meeting, David Gough stressed the importance of teamwork in any META and the evening provided the opportunity for team members to get to know something about each other and the particular skills they would bring to the trip.

David extended greetings from Bishop Hilary of Yei, who will visit Connor from February 23 until March 4 next year.

He spoke about the work of CMSI in Ireland and abroad, and talked specifically about Sudan, its religious make–up and the current situation in the new country of South Sudan, which gained its independence in July 2011. The country has been subject to two civil wars – the latest one ended in 2005 after 23 years and cost 1.9 civilian lives, with four million people forced to flee their homes.

Since the Comprehensive Peace Agreement was signed many of these displaced people have returned home, up to two million arriving in advance of or just after independence. There is still unrest in border areas, but David stressed that this conflict is many hundreds of miles from Yei and that CMSI has an evacuation plan should it be needed.

The South Sudan government is largely inexperienced and there is still a huge dependence on neighbouring countries for trade. The infrastructure remains poor, the only tarmac road is a 40 mile stretch in the capital Juba.

Yei Diocese has a population of 280,000 with 150,000 living in Yei town. The diocese runs seven schools, the school in Mongo village was funded by Connor Diocese, and it also runs the Vocational Training college, Martha Clinic, mobile clinics, a micro–enterprise project and leadership and teacher training.

Archdeacon Stephen Forde, who chairs Connor’s Council for Mission, said that this visit would be an opportunity to determine what areas Connor should focus on during this second five years of the partnership.

Bishop Alan said he would be looking forward to meeting Bishop Hilary in Yei to discuss what issues he considered to be a priority, but stressed that the team should also be finding out what Connor could gain from the partnership too. Building relationships is key, he said.

The visit will coincide with the four–day Yei Diocesan Synod. During this time the clergy members of the Connor team will be delivering daily Bible teaching sessions. They will also address other issues with the Synod members.

Dr Dobbs will be building on relationships he established during a previous visit to Yei in the Martha and other clinics in Yei and offering health support, while Judith is hoping to deliver training to youth leaders in the diocese.

The group will all have the opportunity to visit Mongo school, and the various diocesan organisations, as well as participate in services in Yei Cathedral and other parishes on the Sunday of their visit.

The DCO will be compiling a record of the visit and, technology permitting, will be reporting on the Connor diocesan website from Yei on a daily basis.

The Connor Yei team will be commissioned during a service in Lisburn Cathedral at 3.30pm on Sunday December 2.