Dean of Belfast finds India to be a land of contrasts 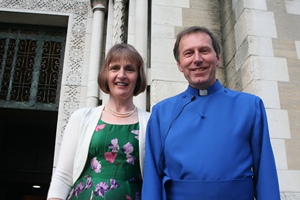 The Dean of Belfast, the Very Rev John Mann, witnessed the struggles of daily life for the poorest of the poor during an 11–day trip to India with Christian Aid.

John and his wife Helen travelled with Rosamond Bennett, Chief Executive of Christian Aid, and Deborah Doherty, Head of Church and Community with the charity. They visited projects working to improve the standards of living, health and education, particularly of the Dalit people, who are seen as the lowest strata of Indian society, and one project which focused on those who are HIV positive.

The Black Santa sitout for Charities has taken place on the steps of St Anne’s Cathedral, Belfast for 35 years. A portion of the money donated goes to Christian Aid for work overseas. December 2011 saw John’s first sitout, and Christian Aid was one of a number of organisations to invite the Dean to visit project which benefit. 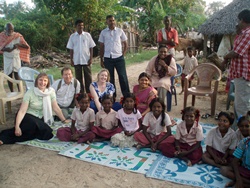 The trip began in Delhi, where the group was briefed at the local Christian Aid office, before flying to the coastal city of Chennai in Tamil Nadu and driving on to Pondicherry to visit a project working with Dalit families, really the lowest of the people, below those in the caste system. The project, run by Dalit people themselves, is working to support the Dalit community in upholding their civil rights. They do, in fact, have the same rights as everyone else, but in practise it is very hard for them to realise these rights, because they are treated in such a poor way and have no–one speaking up for them. Christian Aid is supporting an organisation fighting for equality in education, health–care and access to the courts.

The group returned to Chennai, where on Sunday, John preached (in his socks – shoes were removed at the door!) at the Tamil Lutheran Church of the Good Shepherd. “It was a really interesting experience” said John. “After I preached in English, the priest delivered a summary in Tamil. The Church was using the Revised Common lectionary, so we had the same Gospel as we did in the Cathedral that Sunday, which showed a real sense of unity.” 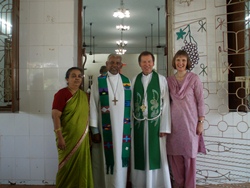 There were some differences. For example, when receiving communion wine, a person tilted their head back and the priest poured the wine into their mouth. “Thankfully, I was giving out the bread, otherwise it could have got messy!” John said.

John and Helen also visited the Shrine of the Apostle Saint Thomas, who was martyred after bringing Christianity to India. Then they flew to Madaurai in the centre of south India, and drove on to Theni in the countryside, where they visited a former leprosy hospital, which now focuses on patients who are HIV positive.

“We met with some really inspirational women in this place. In fact, in the experiences we had in India generally it was the women who were the inspiration,” said John. “In Theni, women from different villages have come together to form self–help groups, supporting families with health issues and especially those discovering the shattering news that they were HIV positive. 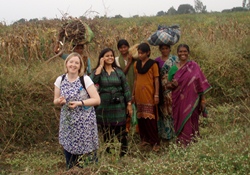 “Many of these women, of which we met about 40, had come a long distance, they were themselves HIV positive, and as such they were able to form a network of volunteer health visitors who could really engage with those who found themselves in the same predicament. They were able to give advice and to encourage all pregnant women to be screened, in order that, if HIV positive they could take steps to avoid passing the infection on to their new child. Through their dedication and hard work, 98 per cent of pregnant women are now tested, whilst before the project began it was about seven per cent.”

John added: “All four of us found it completely inspiring, that these women who are so poor themselves are prepared to give so much in order to support those who are in a similar predicament in their own community.”

The group also visited some of the villages and experienced the effects of poverty found there. “Most of the houses were either damaged, or were mere temporary structures, there were no toilets and everyone slept on the floor. Electricity hadn’t reached this place, with its open sewers and lack of possessions the signs of a community needing a lift were everywhere,” said John. “They did have clean water from a pump, which was a considerable blessing.

‘A PLACE TO BURY OUR DEAD’

“We asked them what would most improve their lives, and the answer surprised us, for, they all said, ‘a place to bury our dead,’ even though to us there were much more immediate needs. We felt so helpless. It would have been easy to take out a 500 rupee note, which would have been a huge amount of money to them, but we could not give to one without giving to everyone. The way forward seems to be through projects sponsored by Christian Aid and overseen by the Indian office.”

The group flew on to Hyderabad, the most religiously divided of all Indian cities it is 52 per cent Hindu, 42 per cent Muslim. “Christian Aid is supporting COVA, a community outreach programme involved in promoting social justice, aimed at bringing people of different faiths together. Hyderabad has had inter–faith riots over the past 40 years and COVA sees Belfast as an inspiration, showing how they can resolve their differences,” John said.

Unfortunately, here John and Helen both fell victim to the infamous ‘Delhi Belly.’ “Next morning, I felt like curling up with a hot water bottle, a duvet and a DVD, but instead we drove for two hours into the countryside to Zaheerabad,” said John. “Here we visited what was probably the most inspirational of all the projects we saw.”

“Twenty years ago, the Dalit people of this area were starving. The women came together and with help from a Christian Aid sponsored project, they encouraged families to grow their own food. They cleared and dug the ground themselves. When the land was ready they were loaned money by the project to buy seeds. Twenty years later, these women are not only feeding themselves and their families, but others as well.”

The women have created a community seed bank, storing 150 different seeds, and run the only organic seed outlet in the whole of India.

They are also teaching local schoolchildren about the seeds, to ensure that their legacy is passed to the next generation. “Their work is recorded in film, by a 10–year old girl, who has been brought up in an uneducated family in very poor conditions,” said John. “Yet this girl has travelled abroad, showing her films and talking of what they are doing.”

The women have also set up their own local radio station, where the Irish group were recorded singing ‘Molly Malone!’

The group returned to Hyderabad and flew the next day to Dubai, en route for Dublin and home. “The few hours in Dubai had quite an effect upon us, for the sheer unapologetic flaunting of wealth after the scenes we had witnessed in India were just too big a contrast to contain.” John commented.

As he prepares for his second Black Santa sitout, John said: “The money taken on the Cathedral steps is going towards vital work, and a small amount goes a very long way. Through Christian Aid the money is being put into the hands of people who know what to do in local communities who badly need our help.”

The Black Santa sitout gets under way on the steps of Saint Anne’s Cathedral on Saturday December 15 .