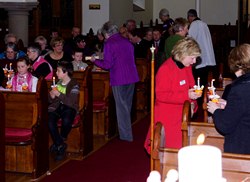 The service was conducted by the rector of Ballymoney, the Rev Andrew Sweeney. Almost 100 people attended, mostly from North and Mid Connor, with a small number attending from north Belfast.

Everyone in the congregation received Christingle oranges which were lit while the hymn, ‘Shine, Jesus shine ‘ was sung. It was really magical!

Connor Diocesan President Moira Thom told the congregation about the MU Worldwide Fund and how numeracy and literacy skills are taught to men and women in Sudan and Burundi. Other MU members read the lessons and led the prayers.

The rector gathered the children at the front of the church and talked about Advent and the meaning of Christingle, and there was great interaction between Andrew and the youngsters.

On leaving the church, children’s ‘Goodie’ bags were handed out containing crayons, colouring in sheets about Christingle, a Christmas card, MU literature and some sweets.

Following the service mulled wine and shortbread for adults, ‘top hats’ and crispy buns for children were served in the church hall.

Christingle is one of the ways Connor MU aims to reach out to young families.