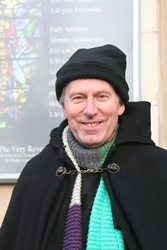 The Dean of Belfast begins his second Black Santa Christmas sitout for charity at St Anne’s Cathedral on Saturday December 15.

In the days leading up to Christmas Eve, the Very Rev John Mann will be joined on the cathedral steps by Cathedral clergy, the Bishops of Connor and Down and Dromore, and members of the Cathedral Chapter including its Ecumenical Canons.

During the past year, Dean Mann has visited a number of local projects supported by funds raised by the 2011 sitout. The Dean said: “I saw at first hand the wonderful work local charities are doing and the huge number of volunteers giving up their time and energy to help others.”

The Dean also saw how money donated outside St Anne’s is making a difference to lives of some of India’s poorest people when he visited various regions of India with Christian Aid in November.

Fifteen per cent of the money raised by the Black Santa appeal goes abroad, mostly under the auspices of Christian Aid. The other 85 per cent is distributed to charities here in Northern Ireland. 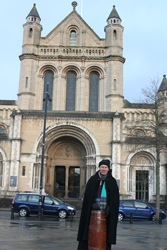 Dean Mann said he hoped this year’s sitout would raise close to £200,000. “I am very much aware that these are difficult times for everyone, but charities too are experiencing financial difficulties. Any donation, however small, is always very much appreciated.

“Generosity is a source of our own inner peace and wellbeing as we celebrate God’s gift to us once again at Christmas.”

This will be the 36th Black Santa sitout, a tradition started in 1976 by Dean Sammy Crooks who, concerned at the emphasis being placed on necessary and costly building programmes at the Cathedral, decided to stand on Donegall Street in front of the Cathedral and beg for the poor and charitable causes.

The sitout takes place every day from Saturday December 15 until Christmas Eve with the exception of Sundays.

The Dean of Belfas is to be the guest on ‘My Kinda Music’ with Siobhan McGarry on Downtown Radio on Sunday December 16 from 10.00am. Tune into the show to hear more about the Dean and his choices of music, the sitout and the life and work of the cathedral.

The Belfast Telegraph will also be running a Black Santa Diary during the sitout, so readers can keep up with the day to day happenings on the steps of the Cathedral.