Enthronement of new Archbishop of Armagh

Report and photos by Paul Harron

The Service of Enthronement for the new Archbishop of Armagh and Primate of All Ireland, The Most Rev Dr Richard Clarke, took place at St Patrick’s Cathedral, Armagh on Saturday December 15.

The large congregation included representatives from a wide number of Christian traditions, including the Secretary General of the Anglican Communion; the President of the Irish Council of Churches; the General Secretary of Churches Together in Britain and Ireland; the President of the Methodist Church in Ireland; the Moderator of the Presbyterian Church in Ireland; and Cardinal Sean Brady. 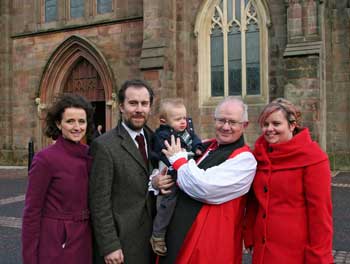 The new Archbishop gave the address and the Bible readings were led by Mrs Ethne Harkness, an Honorary Secretary of the General Synod, and Archdeacon of Armagh, The Venerable Raymond Hoey.

The Enthronement Service was followed by a reception in the Royal School, Armagh.

FULL TRANSCRIPT OF THE ARCHBISHOP’S ADDRESS:

It is my friend and colleague the Archbishop of Dublin who knows all that needs to be known about Saint Augustine (and probably a great deal more as well) and it is therefore with a faint nod of apology in his direction, and in yours also, that I now begin with Saint Augustine.

In a well–known passage, Augustine gave stern advice to bishops (and presumably to archbishops also): They were ‘to rebuke agitators, to comfort the faint–hearted, to take care of the weak, to confute enemies, to take heed of snares, to teach the uneducated, to waken the sluggish, to hold back the quarrelsome, to put the conceited in their place, to appease the militant, to give help to the poor, to liberate the oppressed, to encourage the good, to endure the evil, and to love them all’. The only comfort is that all this would probably have been no easier to achieve in the early fifth century than it might be in the early twenty–first century. And it would be utterly impossible even to begin such a task – at any point in history – were one mistakenly to believe that the ministry of any bishop or archbishop is simply the ministry of an individual. Rather, it is an entering into the ministry of Jesus Christ to the world, and it is a ministry that is to be undertaken in a firm collaboration with the whole peopleof God, and in that context I would like to welcome those from other Christian traditions who have come to share in our worship today.

That ministry was of its essence collaborative was clear to the early Fathers of the Church. Saint Cyprian of Carthage in the third century reminded his readers that the bishop is not just a single individual, even less an individualist – he is given a particular authority at ordination, but is also part of a single episcopate into which he enters in a full possession, and for the totality of which he must take his share in responsibility. But, Cyprian also believed, the bishop can only move forwards on any issue when the counsel and guidance of clergy and people within the Church have been sought. It was Augustine who said that a bishop must be teach–able in two senses – able to teach and capable of being taught.

This is in fact underlined in the first two sentences of the charge, in the Church of Ireland’s liturgy, to a new bishop at his – or her – consecration. ‘Bishops are called to lead in serving and caring for the people of God and to work with them in the oversight of the Church. As chief pastors, they share with their fellow bishops a special responsibility to maintain and further the unity of the Church, to uphold its discipline, to guard its faith and to promote its mission throughout the world.’

All Christian ministry, whether local or in the wider context, is therefore collaborative. As Saint Paul insisted (and repeatedly), we are co–workers with God, and with one another; we are to work together, in collaboration with one another, as within the Body of Christ. The bishop or archbishop is not the custodian of an endless supply of magic wands to solve every problem, much as people may pretend to believe otherwise. In a famous passage in the twelfth chapter of his first letter to the Corinthians, Saint Paul reminds us that no member of the Church can opt out of the task of working with others for the furtherance of the Gospel, and in serving the world around us. But equally, no–one can refuse to take an individual responsibility on behalf of the whole body when such is required.

And so, it cannot mean – whether for any of us as individuals, or for all of us collaboratively – that we are to be paralysed either into dithering indecision or into a self–imposed trappist silence on anything of consequence. There are also indeed those times when the individual – in whatever capacity – must make final decisions that are not popular, neither popular nor populist. And nor is silence enjoined on any of us. It was Augustine’s mentor, Ambrose of Milan, who said that a bishop can do nothing more perilous before God and shameful before the people than fail to express freely his own thoughts. (What a P.R. nightmare!)

But if you and I are to see working together as of the essence of all Christian ministry and all Christian discipleship and service, there is a further demand on us. We are also to model – in our relationships with one another and in our relationship with the world – an aspect of God we so often decline to notice. The great English mystic of the late fourteenth and early fifteenth century, Julian of Norwich, repeatedly uses a phrase in her writings, ‘Our courteous Lord’. The courtesy of God. We are to reflect this courtesy of God in our individual lives and in the life of the Church. We live, however, in a culture within which anger rather than courtesy is the most prevalent behavioural pattern. Indeed, many seem to find their only focus and meaning in life through constant rage. Salman Rushdie has coined a useful phrase, ‘outrage identity’, for those who can find any meaning for themselves only in their anger at others. True courtesy is the converse of spiteful anger. And courtesy is not simply good manners – desirable as they most certainly are – but goes a great deal further.

The essence of courtesy is that it treats ‘the other’ – whoever or whatever that ‘other’ may be – as an individual always worthy of respect, whose very individuality is to be allowed an integrity of its own. This is how God treats us – accepting us as worthy of love, treating us as individuals deserving of respect, never intimidating or bullying us into abject submission, but listening with love and discernment to what we are saying. But courtesy – the word being used with care – goes further even than this. Courtesy goes beyond the strictly necessary or contractual, in giving to another. We can use the word quite casually in this sense – doing something ‘as a courtesy’, having the use of a ‘courtesy car’ – and in fact the meaning is not very different. It means generously going further than we actually have to go, in our service of another individual. It is the very reverse of manipulation, mean–mindedness, and calculated malice, which sadly can so easily be cloaked as moral high–mindedness. (How often, when we hear those fateful words at the beginning of a speech, ‘With all due respect..’, we just know that we are going to have to endure a particularly nasty rant that is utterly disrespectful.) But the courtesy of God is never ego–driven, unloving or bullying. And if you and I cannot, and will not, model the courtesy of God in our dealings one with another within the Church, and in our relationships with those outside the walls of the Church who are also made in the image and likeness of God, we have indeed fallen at the first fence in Christian faithfulness. The God we worship is a God of beauty and of truth, and our language and our actions are to mirror this. So George Herbert would remind us that ‘beauty and beauteous words should go together’. ‘Bad language’, for the Christian, is not merely the obviously obscene or coarse. It is also the language of disdain and of scorn. That, in the eyes of God, is also profane.

If then, the weak are to be cared for, the faint–hearted comforted, the uneducated taught, the sluggish awakened and the good encouraged; if the agitators are to be rebuked, the conceited put in their place, the quarrelsome held back, and evil people to be endured, and all of them to be loved, it can only be when we hold – before our eyes and in our hearts – the image of Jesus Christ who calls us to be his co–workers together in his service, and in serving his world. And it can also only be, when we have learnt to model – in all that we say and do – the courtesy of God, our courteous Lord.

But it is with a more recent figure than either Augustine or Julian of Norwich that I wish to conclude: William Temple, one of the great Archbishops of Canterbury of the past century, or of any other century. When he was enthroned as Bishop of Manchester in 1921, Temple asked of the people there that they would pray for him, and in a slightly abbreviated form, this is what he asked of them:

‘Pray for me, not simply that I may be wise or good although for these I need your prayers, but pray for me also that I may never let go the hand of the Lord Jesus Christ but ever walk in daily fellowship with him. So shall we go forwards together, not without stumbling and not without weariness, but always towards the loving welcome that awaits us in our Father’s House.’