Black Santa says thanks as he prepares for Good Samaritans Service 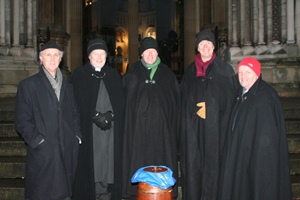 The Black Santa Sitout for charities which took place on the steps of St Anne’s Cathedral, Belfast, in the days before Christmas, now moves into its second phase.

Attention turns from the generosity of the giver to the needs of the charities and their hard working volunteers and supporters. The Cathedral is now preparing for the annual ‘Good Samaritan Service’ which takes place at 3.30 p.m. on Sunday February 3.

The Dean of Belfast, the Very Rev John Mann, said that the names of those presenting the cheques and the list of Charities receiving a grant will be announced in due course.

“The fact that it is still set to rise is because of a number of factors: The coin under 50p in value has still to be counted (and 87 weighty bags of it were sent to the bank), cheques are still arriving from parishes, individuals and institutions and we have the Gift Aid tax refunds to add – which could well amount to £10,000.

“So we are hopeful that the first target – to exceed the total from Christmas 2011 will be passed and we may get close to the overall target of £200,000. May I once again thank everyone who has contributed for their generosity.”