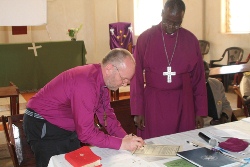 The Bishop of Connor preached at the service which opened the tri–annual Synod of Yei, South Sudan, on Thursday January 17.

Bishop Alan Abernethy and the team from Connor were among the special guests at the Synod which began at 9am in Yei Cathedral.

Bishop Alan preached on Nehemiah and had the Synod delegates participating with enthusiasm. During the opening of Synod Bishop Alan also introduced the team members, who brought greetings from to the Synod from their parishes and families at home.

GP Dr Frank Dobbs was the only team member absent – Frank was at the local hospital delivering a training session to local nurses. 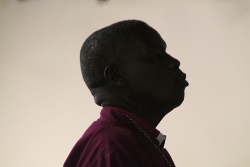 The Synod continues until Saturday afternoon, although the Connor team are not involved all the time. On Thursday afternoon, they had tea with John and Poppy Spens, former CMSI mission associates in Yei, who had just flown in from their home in Winchester. John and Poppy have been a great help to Connor visitors to Yei in the past, and following tea John took some members of the team on a drive through Yei town.

One of the sites they hoped to see was the new Post Office – quite unique in somewhere like Yei where no postal service exists!

The previous day, their second in Yei, team members met with various groups including youth co–ordinator Amule and Rev Obediah, former diocesan lay training co–ordinator who has been supported by CMS Ireland and Connor Diocese to run a number of lay training sessions. 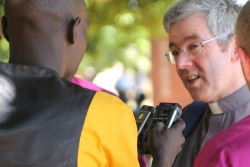 The clergy members of the team, Bishop Alan, Canon Sam Wright, Archdeacon Stephen Forde and the Rev Andrew Sweeney, along with Judith Cairns, Chief Executive of Love for Live, will deliver two days of training to local pastors on Friday and Saturday, and some time was spent preparing for these.

Frank held a number of meetings at Yei Hospital, and on Wednesday afternoon he visited the wards, accompanied by Andrew, David Gough of CMS Ireland and Diocesan Communications Officer Karen Bushby. Here conditions on first impression were not much improved since Karen last visited the hospital in January 2010 – the wards were still seriously lacking in equipment including mattresses and mosquito nets, the nurses had no uniforms, the paint was peeling from the walls and the grounds were still a camping ground for the families of patients who have to provide food for their sick relative.

But there were improvements. In January 2010 the hospital had no doctors. Today there are six, and 49 nurses who despite the lack of uniforms and depressing fabric of the wards were working hard and with dedication to look after those who needed their care.

New buildings have also sprung up, housing a TB ward and a training centre. Change is happening though its progress may be slow.

Yei is three hours ahead of Uk time. The weather here remains hot and dry, the food at the Episcopal Church of Sudan Guesthouse is excellent, and the team are all in good health and enjoying the hospitality of Bishop Hilary and his staff.

Photos are being uploaded daily to a Picasa web album (when the internet connection allows) so follow the link on our home page to keep up with the team’s progress.

There is now a blog on the CMS Ireland website (www.cmsireland.org) called Connor team Yei 2013.