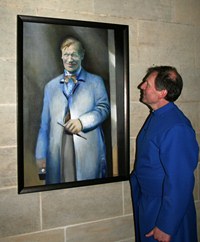 A rare portrait of sculptor Morris Harding by the artist Poppy Mollan has been presented to St Anne’s Cathedral, Belfast by a donor who wishes to remain anonymous.

The craftsman George Frederick Morris Harding, PPRUA (1874–1964) spent many years as sculptor of the impressive capitals and corbels of the nave pillars at St Anne’s Cathedral, Belfast.

His striking portrait, which was purchased when it came onto the local art market, is now hanging in the ambulatory of the cathedral.

The Dean of Belfast, the Very Rev John Mann, who only last year unveiled a Blue Plaque in commemoration of Morris Harding outside the artist’s home at Church Road, Holywood, said he was delighted that the Cathedral has been so generously presented with the painting.

“Morris Harding made a remarkable contribution to the visual impact of this special sacred space and it is fitting that his portrait is now on display here,” the Dean said.

As an accomplished craftsman, the English–born Harding was invited in 1925, at the age of 51, to work on designs for many of the capitals and corbels in the nave together with other carvings and the bronze soldier on top of the memorial lectern to the fallen of the 36th (Ulster) Division. This body of work became the major undertaking of his career.

For more than 12 years Harding worked high above the floor of the cathedral completing the work. The carvings include depictions of the philosopher Bishop George Berkeley; Bishop Jeremy Taylor, author of the spiritual classic Holy Living and Holy Dying; and the hymn–writer Mrs Cecil Frances Alexander who wrote ‘There is a green hill far away,’ ‘All things bright and beautiful’ and ‘Once in royal David’s city.’ Shipbuilding, the linen industry, agriculture, science and the arts are also represented.

Once living in Belfast, Harding joined the Belfast Arts Society and later became President of the Royal Ulster Academy. He shared a studio in Holywood, Co Down with the noted artist Rosamond Praeger whose work is also integral to the cathedral’s decorative scheme in both the baptistery and on the bronze plaque at Carson’s tomb.

The portrait of Harding is thought to be the one exhibited by Belfast–based artist Poppy Mollan at the Ulster Academy of Arts in 1936. Mollan and John Luke assisted Harding in 1938 with a commission for the Northern Ireland Government’s pavilion at the Glasgow Empire Exhibition. Mollan went on to exhibit at the Royal Hibernian Academy between 1927 and 1940.