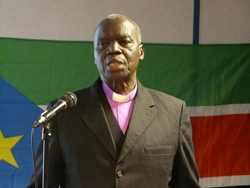 The challenges facing the church in the world’s newest country were outlined by Bishop Hilary of Yei when he addressed a Sudan Focus evening at CMS Ireland offices on February 26.

The Bishop is no stranger to Ireland and in particular to Connor Diocese which has had a link with Yei in South Sudan since 2006. That partnership was extended for a further five years when Bishop Hilary and the Bishop of Connor, the Rt Rev Alan Abernethy, signed an Agreement when Bishop Alan and a team visited Yei in January.

Dr Frank Dobbs, a GP from Agherton, was a member of the team, and he joined around 30 people for the Sudan Focus evening. Before hearing from Bishop Hilary, CMSI Partnership Co–ordinator interviewed a number of people who have visited different dioceses in Sudan over the years.

These included Rory Corbett from the Diocese of Down and Dromore who visited Meridi Diocese for the first time last year, and Trevor Buchanan, also Down and Dromore, who has been in Sudan four times. 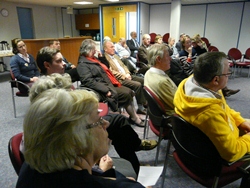 Billy Smyth who established the Yei Vocational Training College, lived in Yei for many years along with his wife Jenny and his two children. He was interviewed about his memories of first meeting Bishop Hilary and about his thoughts on how Yei Diocese compares to the Diocese of Ibba, which Billy visited for the first time recently.

In his address, Bishop Hilary spoke about the present situation in South Sudan, which achieved its independence in July 2011. He addressed the issues facing this fledgling government, and the ongoing security issues, particularly in Abyei and Nuba Mountains.

The Bishop said he was delighted that his aspiration to build six primary schools in the Diocese of Yei had been surpassed with the completion of a total of eight primary schools. He spoke in particular about the success of Immanuel Model Primary School in Yei town and Mongo Primary School which was constructed with funds donated by Connor Diocese. He thanked CMSI and especially Connor Diocese for their support for his schools programme, and talked of his hopes for the construction of a Church run secondary school in the area.

The Bishop also spoke about the various health institutions run by the Diocese of Yei, including the Martha Primary Care Clinic, the mobile clinic, the eye clinic and the new children’s ward.

Looking back to January, Bishop Hilary said how wonderful the visit by Bishop Alan and the Connor team had been, especially for the young people who attended a youth camp at which team members spoke, and he also expressed his delight that the Partnership Agreement between the two dioceses had been extended for a further five years.

The evening finished with interviews with Frank who talked about the highlights of the January Connor trip, and Down and Dromore’s Jame Corbett who reflected on her passion for South Sudan.

During the course of the evening, Bishop Hilary revealed his joy and surprise at meeting two Sudanese people when he was speaking earlier in the week at Kill O the Grange parish in Dublin. Now resident in Ireland, the two are part of the Sudanese Community Association. They had moved to Ireland from Khartoum where, many years ago, Bishop Hilary had once been their geography teacher!

Bishop Hilary will be speaking at the midweek service in Broughshane Parish at 7pm on February 27and after spending some time with the Dean of Connor, the Very Rev John Bond and his wife Joyce he will be a guest of the Archdeacon of Dalriada, the Ven Stephen Forde, rector of Larne.

He will also spend some time in Agherton Parish with Dr Frank Dobbs, and is hoping to stroll on the beach in Portstewart with some of the Agherton parishioners, and perhaps pay a visit to the Giant’s Causeway.

From there he will head to Ballymoney Parish as guest of the Rev Andrew Sweeney and will be interviewed by the rector during the Sunday service in Ballymoney.

Stephen, Frank and Andrew all had the opportunity to spend time with Bishop Hilary as they were members of the team which visited South Sudan in January.

You can download an interview with Bishop Hilary which was published in the Connor diocesan magazine Connor Connections in June 2008 here.