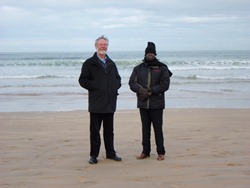 The Bishop was visiting parishioners in Agherton who had helped fund the building of a primary school in Mongo village where he grew up.

He was in Ireland and the UK meeting with dioceses and parishes who have partnered and supported the church in Yei, including the Diocese of Connor. 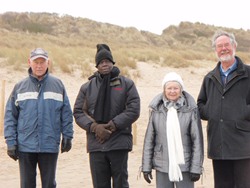 Earlier in the week he was the guest speaker at a special Sudan Focus Evening organised by CMS Ireland. Here he spoke about the present situation in South Sudan, which achieved its independence in July 2011. He said he was delighted that his aspiration to build six primary schools in the Diocese of Yei had been surpassed with the completion of a total of eight primary schools.

He referred to the success of Mongo Primary School which was constructed with funds donated by Connor Diocese, and talked of his hopes for the construction of a Church run secondary school in the area. 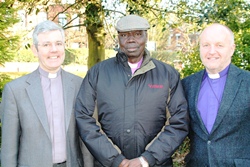 Looking back to January, Bishop Hilary spoke about the visit by the Bishop of Connor, the Rt Rev Alan Abernethy, and the Connor team and expressed his delight that the Partnership Agreement between the two dioceses had been extended for a further five years.

Bishop Hilary left Belfast for Broughshane where he was the guest of the Dean of Connor, the Very Rev John Bond and his wife Joyce, preaching at the midweek service on February 27. 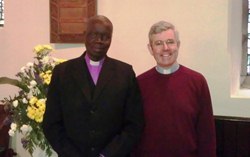 The Bishop was also a guest of the Archdeacon of Dalriada, the Ven Stephen Forde, rector of Larne. He attended a CME meeting held in St John’s Parish, Malone, where he read two lessons during the service of Holy Communion which opened the meeting.

The Bishop also had a chance to chat informally to curates from across the north of Ireland. 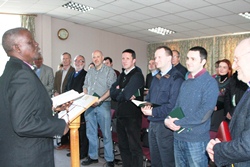 In Larne that evening, he met with parishioners of St Cedma’s and after a restful Friday morning he headed to Agherton Parish where he was the guest of Dr Frank Dobbs and his wife Beryl. That evening Bishop Hilary attended the Women’s World Day of Prayer service, and said he had been impressed by the depth of thought behind the portrayal of asylum seekers and refugees.

The Bishop enjoyed a bracing Saturday morning stroll on the beach in Portstewart with some of the Agherton parishioners on the Saturday morning and that afternoon visited the famous stones of the Giant’s Causeway. 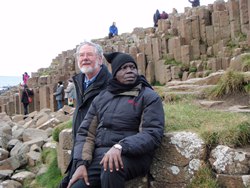 He expressed his delight at being by the sea. “Sudan is landlocked and we don’t have any big bodies of water near us except for the Yei River. When my wife Mama Joyce was in Northern Ireland for the first time and we visited the north coast she was fascinated by the size of the waves and to make it even more amazing there was someone out surfing!

“Experiences like this are among the great pleasures of our partnership with Connor Diocese!”

From Agherton he headed to Ballymoney Parish as guest of the Rev Andrew Sweeney and was interviewed by the rector during the Sunday service in Ballymoney. 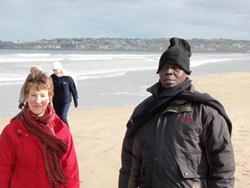 Speaking during his stay in Connor, Bishop Hilary said: “This visit to Connor Diocese is extremely important, allowing me to reconnect and to see the people who are behind the partnership, supporting it from this end. It is also an opportunity for me to show my appreciation of the assistance they have given that is changing lives in South Sudan.

“This visit reinforces our partnership following the signing of the second five year agreement during Bishop Alan’s visit to Yei in January. 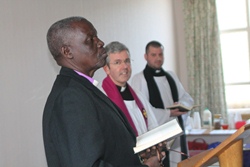 “Some may see it as a crazy dream of Bishop Hilary, trying to do things that seem impossible, but I trust in the Lord and I am not alone. We have people who have helped us, like our friends in Connor.

“I am looking forward to people from Yei coming here in the next five years so they too can meet the people behind the partnership. This partnership has helped us to realise our dream of contributing to the needs of education in this new nation called South Sudan.” 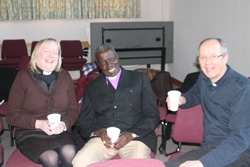 Bishop Hilary left Ireland on March 4 to meet partners in the UK before heading back to South Sudan.