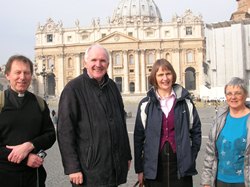 The Dean of Belfast, the Very Rev John Mann, travelled to Rome this month along with his wife Helen at the invitation of Dr Maria Voce, President of the Focolare movement.

They returned home before the Papal election! Here Dean Mann recalls the highlights of the visit.

We flew into Rome on Monday March 4 in lovely warm sunshine and spent that day sightseeing. On Tuesday, having visited St Peter’s Basilica and viewed the preparations for the election of the Pope we walked the short distance to the Anglican Centre in Rome. It was founded in 1966, following the landmark meeting between Pope Paul VI and Archbishop Michael Ramsey. 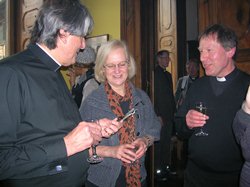 “The Anglican Centre has become both a focus for creative encounter between Anglicans and Roman Catholics and a major resource for Anglicans of very varied background and conviction. It is a vital gift to the Communion and to the whole ecumenical enterprise.” +Rowan Williams, former Archbishop of Canterbury.

We were welcomed by Canon David Richardson, the Director of the Centre and we shared in a service of Holy Communion, followed by lunch at which we presented Canon Richardson and his wife Margie with a St Brigid’s Cross made of Irish bog oak. The Centre is used for conferences and runs various courses and has an important ministry of hospitality and prayer. 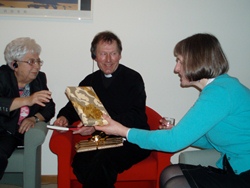 On Wednesday came the meeting around which the whole journey to Rome was built: A visit to the centre of the worldwide Focolare movement. This is sited in the hills south of Rome in Frascati (it is also an important wine growing region). As the train wound its way up the track, so the weather became increasingly awful; the rain fell in great sheets of water and we dashed from place to place. The welcome was very warm and we had a translator from Tipparary – Jenny – who had been a member of the Focolare for many years. We saw most of the complex and had a meeting for an hour with Maria Voce, the head of the Focolare movement. She had spoken in St Anne’s Cathedral last June, appealing for unity amongst all Christians and on Focolare principles to live one’s life for the other person, sharing all one has and recognising in God not only truth and justice and love, but also beauty. We spoke of Christ forsaken on the Cross, a meeting place of great significance in Focolare spirituality, where oneness with the pain and loneliness of many in the world is to be found. 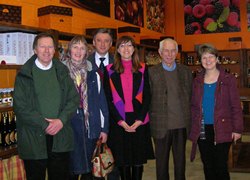 On Thursday we travelled by high speed train (250 km per hour) to Loppiano, a village in Tuscany where the whole community lives on Focolare principles and everyone, man, woman and child, meets each evening in Church after work to sing and pray and share the Eucharist together. Recently they have established a small University and there are small units within the village that teach those who wish to become a Focolarine about their way of life. There are cultural centres, artistic units and a wonderful pottery. Here we shared experiences and spoke to many people who were temporally or permanently sharing the community life of this place. Whilst everything was in Italian, we were always helped by a translator.

We didn’t need a translator for a meal that night though, as we were entertained by Sally McAllister who left the New Lodge in the early 1970’s to become a Focolarine. For more than 20 years she was secretary to Cardinal Basil Hume, the Archbishop of Westminster. Needless to say, we had plenty of Belfast chat!

On Friday morning near Loppiano we visited the business park of the Focolare. This is worked on principles that go well beyond a co–operative. They describe it as ‘The Economy of Communion.’ Chiara Lubich, the founder of the Focolare movement 70 years ago described it in this way: 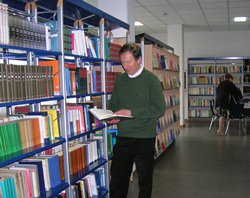 “I thought that we could bring about among our people businesses, in a way to engage the capacities and resources of everybody in order to produce in the same time wealth in favour of those who are in need. Their management should have to be entrusted to competent people capable of making them function effectively in order to gain profits. These have freely to be put into common. Partially these profits have to be used for the same aims of the first Christian community: to help the poor and to provide what they need for their living until they have found work. Another has to be used to develop structures of formation for new men/women, that means for the formation of people who are animated by love, able to live what we call the culture of giving. A last part certainly has to be used to increase the company.” (Chiara Lubich)

This philosophy has produced a most amazing effect on a range of businesses, working together, supporting one another, making money and supporting the poor and all in need. The fact that this whole community from business park to University, from farms to its places of hospitality, works on the principle of selfless giving is inspirational.

Helen and I were accompanied to Italy by a member of the NI Focolare, Renate Komorek, who translated for us and helped us in every way. We met Fr Brendan Leahy in Rome too. Fr Leahy is to be ordained RC Bishop of Limerick on April 14 this year and is another member of the Focolare in Ireland.