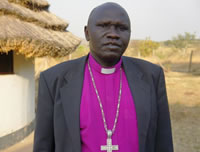 The nations of Sudan and South Sudan need each other, a South Sudanese bishop has said as an agreement is announced on renewing oil production.

Connor Diocese is involved in a 10–year partnership with Yei Diocese which is in South Sudan.

“Having good relations between Sudan and South Sudan is crucial for both countries,” said the Rt Rev Anthony Poggo, Bishop of the Diocese of Kajo–Keji, on a visit to CMS.

“As people who were once one country, we must be good neighbours.”

Bishop Poggo renewed calls for prayer for South Sudan and Sudan, including for the implementation of the agreement on oil production.

It has been reported that just such a deal was announced this week after talks in Ethiopia.

Production was suspended in January 2012 by South Sudan, after the two countries could not agree on sharing oil revenues.

This resulted in a severe austerity budget in South Sudan, which received 98 per cent of its income from oil. This especially affected building of infrastructure and providing services, and led to cuts in civil service salaries.

“The average person in the rural area is carrying on with their life. Indirectly they are affected because prices have definitely gone up,” said Bishop Poggo.

An agreement on resuming production was reached in September last year but not implemented.

Most of the oilfields are in South Sudan, while refineries and pipelines are in Sudan, and oil is without doubt the biggest area of tension between the two countries. Oilfields are also found in the Abyei region – a border area which both nations are still arguing over.

The bishop, from the far south of South Sudan, asked people to persevere in prayer, just as the Sudanese people persevered through the war years and still do now, despite facing so many difficulties.

He highlighted conflict in South Kordofan and the Blue Nile regions, as well as the still–unresolved conflict in Darfur, saying, “When there is peace in the whole of Sudan there will be peace between Sudan and South Sudan.”

The international community still had a role to maintain pressure on both countries to solve these areas of dispute and conflict, said the bishop.

Between 1956 and 2005 when the Comprehensive Peace Agreement was signed, Sudan had seen just 11 years of peace. The war resulted in two million deaths and 4.4 million people displaced.

The task of rebuilding remains monumental. Nevertheless, people have hope. “People are glad there is peace in most parts and glad to have a new country – people feel they are first class citizens in their own country.

As far as the church in Kajo–Keji diocese is concerned, training is the top priority. During the war, leaders were ordained on an emergency basis to cope with growing church numbers. This means most have no formal theological training. The diocese has opened a training college which has 83 students, 57 of them lay leaders.

Priorities for the church are evangelism, empowerment and education, said the bishop.

The diocese runs a community empowerment process and works in both primary and secondary education.

“Many people have not had the chance to go to school,” said Bishop Poggo. “So mothers don’t know malaria is carried by mosquitoes, or that dirty water carries water borne diseases.

“Education enables people to stand on their own.”

CMS also contributes to the work of the diocese, said the bishop. “We link up very well – one of the CMS mission partners Garry Ion [a construction engineer] has been helping us with advice on what we have been able to build, We are very, very grateful for that.

Pray for us to persevere and be patient as we wait on the changes that have to happen in our nation. People have at times been disappointed and discouraged as they had hoped to receive the dividends of peace and the new nation.

That church would remain faithful to its calling and the needed resources would become available for all that we need to undertake.