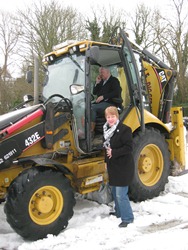 On the first Palm Sunday Jesus rode into Jerusalem on a donkey – on Palm Sunday 2013 a digger proved to be the best form of transport in Magheragall!

The rector the Rev Nicholas Dark explains: “As parishioners in our church prepared to go to church on Palm Sunday 2013 Lisburn was in the grip of the big snow.

“Lisburn and much of Northern Ireland were struggling in six to eight inches of snow but if you lived up the Pond Park Road, Mullaghglass Road and beyond the snowdrifts were eight to 10 feet deep!

“Not to be deterred by a little snow our acting People’s Warden Yvonne Belshaw was one of the first parishioners to arrive for Morning Worship, not on a donkey but on a digger, her route to church being the Pond Park Road which closed to all traffic except diggers.

“Her husband, Glebe Warden Richard Belshaw, began the task of clearing the carpark for other parishioners and in our picture he can be seen inside the cab taking other calls for help which kept him busy well into Holy Week.”

Nicholas continued: “Many thanks to both Richard and Yvonne, especially when they were living with a lengthy power cut at their own home.

“Thank you also to Bobby Cunningham, our Sexton, and his son Chris, who on Saturday cleaned the snow off all the paths in the churchyard to enable parishioners to access the church.”

The rector revealed that 46 parishioners braved the weather to attend Morning Service.

Magheragall’s Preacher Book records that there has been snow like this before. 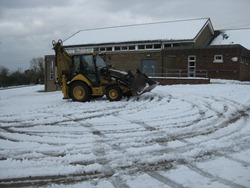 An excerpt dated January 13 1895 reads: “There was no service held in the church on this day …… The Rev GA Bell Curate of Lisburn Cathedral undertook to conduct the morning service but when he arrived, he found the church closed. This was unavoidable as the great snow storm of 12th January completely blocked the approach from the sexton’s house, snow being over five feet deep.”

Nicholas again extended his thanks to everyone who enabled worship to go ahead in Magheragall Church on Palm Sunday 2013.