Appointment of rector at St Peter and St James 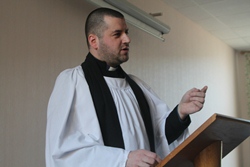 The Rev Brian Lacey, Curate Assistant of the Parish of Ballymena and Ballyclug, has been appointed as Incumbent of the United Parish of Saint Peter and Saint James, Belfast.

The Institution has been arranged for June 17.

Brian lived in Dundonald and later Ballymena. In 1997 he went to Queen’s University, Belfast, to study Archaeology and during this time he felt God calling him towards Ordained Ministry.

Brian attended the Church of the Resurrection at Queen’s and later joined the congregation at St Thomas’s on the Lisburn Road, where he served for two years as People’s Church Warden.

He worked in a number of jobs, and was Sexton in St Anne’s Cathedral before training for Ordination at the Theological College in Dublin. During that time he served as Student Reader in St Thomas’s, as well as in placement parishes with varying styles of worship: Ballymacarett in East Belfast, the Student Chaplaincy at Queen’s, the grouped parishes of Finaghy and Upper Malone, and the Independent Evangelical Church in Gran Canaria.

In 2010 he was ordained as Curate Assistant in the parish of Kilconriola (Ballymena) and Ballyclug. There are three churches within the parish, and during the last year Brian has been the Curate–in–Charge of St Columba’s.

Brian said: “Ballymena is numerically quite a large parish, in both a rural and urban setting, with a commitment to meaningful Anglican worship, a focus on people of all ages and all walks of life, and an emphasis on pastoral care through visiting and teaching.

“As such it is an excellent preparatory parish for a future rector, and I will come to St Peter & St James having been effectively trained and mentored by the Rev Chancellor Stuart Lloyd.”

Brian said he is most interested in challenging people to understand, wrestle with, and deepen their Christian faith.

“I very much look forward to joining St Peter and St James, and getting to know all members of the congregation over a cup of tea in the comfort of their own homes,” Brian said.