Service to mark 60th Anniversary of the Coronation 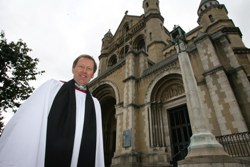 A special service marking the 60th Anniversary of the Coronation of HM Queen Elizabeth II will take place at St Anne’s Cathedral, Belfast, at 3.30pm on Sunday June 2.

St Anne’s is one of many cathedrals and churches across the UK holding celebratory services to celebrate the event.

The service in Belfast will be led by the Dean, the Very Rev John Mann, and the preacher will be the former Presbyterian Moderator, the Rev Dr Ivan Patterson.

The service, likely to be attended by many from across Northern Ireland, will include the hymns ‘All people that on earth do dwell’ and ‘Come Holy Ghost our souls inspire’ and other elements taken from the Coronation Service of 1953, including the Introit, ‘O taste, and see, how gracious the Lord is’ (Psalm 34: 8) and the anthem ‘Zadok the Priest’ by Handel.

Speaking ahead of Sunday afternoon’s service, Dean Mann said: “This magnificent and symbolic event in 1953 is one that remains in the minds of many people – sometimes for the simple reason that they bought their first television set in order to watch it; or the whole street gathered in the living room of a neighbour who had managed to afford one!

“It was a different world, a world that has changed rapidly. I hope that in bringing to mind this historic day in celebration in St Anne’s on Sunday, those recalling it with affection in Belfast may be in joyful mood and uplifted in heart and soul.”