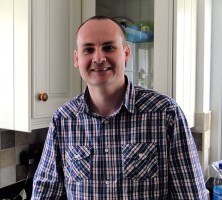 A Church of Ireland ordinand has set himself the unimaginable task of running 52 marathons this summer in order to spread God’s Word.

Alistair Donaldson from Crossmaglen, South Armagh, will run an average of 26 miles a day, six days a week for eight and a half weeks!

He will lap the island of Ireland, running a total distance of 1,298 miles!

Although he will be supported by other runners along the route, health permitting Alistair is endeavouring to go the entire distance himself.

“I want to attempt to run the whole thing, although there are 25 other runners who have agreed to join me at various stages,” the 31–year–old said. “If I cannot physically run then I will sit out, I don’t plan to run for the sake of it. Most people think I am a bit mad, but I believe this is doable.

“The important thing is the initiative behind it and that is the Gospel. We will be running with God’s strength.”

Alistair’s Run4Christ website (http://www.run4christ.org/) states that the run is ‘an initiative seeking to expose many people on the island of Ireland to the amazing Good News of Jesus Christ; His death, resurrection and ascension; and what it means for their own lives.’

Alistair, who has just finished his first year at the Theological Institute, came up with the idea of running round Ireland to spread the Gospel three years ago. He describes himself as ‘an enthusiastic and hopeful if somewhat ordinary runner.’ He has taken part in five marathons in the last seven years.

“Before embarking on the rigorous training schedule in preparation for this massive challenge, I had never run more than two marathons in a year so this is going to be a daunting yet awesome adventure,” said Alistair.

“That being said, Ireland north and south is much in need of hearing the Gospel of Christ afresh in this 21st century. With that in mind the pain and discomfort (terrible chaffing I’m sure) from so many miles will be well worth it.

“My fastest marathon time is four and a half hours, my slowest is five and a half so I reckon on running around five hours each day. The time aspect is not crucial, I would rather take six hours than wear myself out.”

International Mission Agency Crosslinks is partnering Alistair in his endeavor. “Having Crosslinks as a partner also is a blessing and I hope many people feel able to support Crosslinks through this initiative,” Alistair added.

He will reach Connor Diocese on Friday August 19 arriving into Coleraine from Londonderry. The following day he will run to Ballycastle, then after a break on Sunday will continue running via Carnlough, Ballymena, Carrickfergus and Belfast, where he arrives on Thursday August 22.

Alistair will be accompanied daily by a van, equipped with a bath for essential ice baths, and a team of physios will ensure he gets all the physical support and intervention he requires.

He is still organising churches to host him at each of his stops, and is planning on linking with churches so he can preach or speak as he runs around Ireland. If any parish in the towns Alistair is visiting can help with accommodation, run with him, or would like him to preach or speak at an event, please get in touch via the Run4Christ website.

Alistair grew up in a farming family and was a civil engineer for seven years before doing a ministry apprenticeship in Annalong Parish. He is a member of Creggan in Dundalk Group of Parishes, Diocese of Armagh.

With less than four weeks to go before he begins his marathon challenge, Alistair feels he is prepared.

“A large part of the challenge will be mental requiring a lot of stubbornness and I have that in abundance,” he said. “Hopefully God will use this for his purposes and more people will come to faith.”

Further information and full details of Alistair’s route are available on the Run4Christ website.