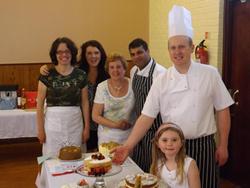 Glorious sunshine drew large crowds to the fete at All Saints’ Craigyhill on Saturday June 8.

The chefs were really impressed with the standard of entries and hope to return next year for a similar competition – anyone interested in booking ahead please drop a line to gfbakeoff@gmail.com 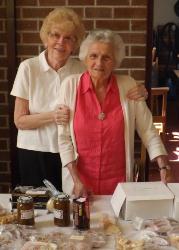 With the cake judging over, the fete was jointly opened by the youngest and oldest members of the congregation – baby Christian McKeag [born in December 2012] and Sally Rankin [born in December 1923]. Sally is a founder member of All Saints and remembers opening the cake stall at the first fete in the 1960s – a stall she still helps with today!

Soon visitors young and old were flocking in – attracted in by the warm weather and the cheerful tones of the Magheramorne Silver Band. The barbecue did a roaring trade, and the stalls were busy inside the church too, along with children’s activities such as a bouncy castle, face–painting and make–a–keyring.

At the end of the afternoon people crowded into the hall for tea and traybakes, and the winning tickets for the raffle were drawn. These included a P&O Ferries return ticket to Scotland, a two night stay at the Ballycastle Holiday Apartments, a carvery meal for twp at the Ballygally Castle Hotel and tickets for the Larne Omniplex Cinema. 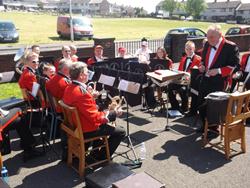 Roger Thompson, rector of St Patrick’s, Cairncastle with All Saints’, Craigyhill, said: “I was absolutely delighted with the way things turned out this year. The enthusiasm of all our volunteers was matched by the brilliant weather. Thanks too must be paid to all our sponsors and donors for helping make the day such a success.”