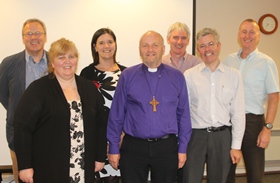 Members of the Connor META (Mission Experience Team Abroad) which visited Yei in South Sudan last January came together for a debrief with CMS Ireland on June 13.

Unfortunately team leader David Gough of CMSI was absent due to illness but he was represented by Ronnie Briggs, Director of CMSI, and Gillian Maganda, Regional Personnel Co–ordinator. Dr Frank Dobbs was also unable to attend.

At the debriefing, held in Ballymoney Parish Hall, Bishop Alan expressed gratitude for David’s leadership, and said that wherever the team went in Yei Diocese, David was warmly welcomed as an old friend. “It is evident that he is much loved in Yei,” Bishop Alan said.

Both Bishop Alan and Archdeacon Stephen Forde, who drove the Connor / Yei link in the first five years, stressed the importance of the role of CMSI played in the partnership. A second five year Partnership Agreement was signed by Bishop Alan and Bishop Hilary of Yei during the January trip. Mr Briggs said this was the only formal diocese to diocese partnership in Ireland.

During the debriefing the team reflected on their expectations of the trip, and how the visit had impacted on each of them. They also considered how they would like to see the partnership develop over the next five years.

There was also time for the team to reconnect, enjoy a meal together, and recall the many emotive and happy moments of the Yei 2013 META.