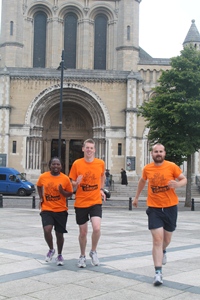 Marathon man Alastair Donaldson and members of his Run4Christ team passed St Anne’s Cathedral on Friday August 23 as they approached the final week of their incredible Gospel Run.

Alastair, a Church of Ireland Ordinand, left his hometown of Crossmaglen on July 1 with the aim of running 1,298 miles (the equivalent of roughly 52 marathons) in the space of eight and a half weeks! He will finish the run back in Crossmaglen on August 29.

He crossed into Connor Diocese last weekend, and has run through the length of the diocese, travelling along roads rural and urban, snaking through Coleraine, Ballycastle, Carnlough, Ballymena, Carrickfergus, reaching Belfast on Thursday August 22.

His aim, simply, is to spread God’s Word.

“People have been very welcoming,” said Alastair. “The run through Carnlough, Cushendall and Cushedun was wonderful. There were lots of people wanting to talk to us and inviting us into their homes where we were asked a lot of insightful questions.

“One of the questions was ‘what does sharing the gospel’ mean and the answer to that is that we just want to tell people of their need for Jesus and to give them a few wee challenges which they can think afterwards, whether already a Christian or not.” 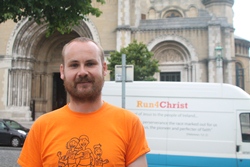 Alastair admits that some of the conversations over the past few weeks have been rather heated, and some a little abstract. As he stopped for photographs outside St Anne’s he received a call on his mobile from a motorist who had been behind the Run4Christ van earlier that morning and felt compelled to tell Alastair that 1,298 miles was not in fact 52 marathons and that indeed he should be covering more than 13,000 miles!

The run has received support from people and parishes, Alastair said, including the Rev Roger Cooke in Coleraine, Catherine Simpson in Ahoghill and Portglenone and Dean John Bond in Broughshane.

But perhaps the most valuable support has come from Alastair’s team of drivers, physios and fellow runners. “I have been running every day but have shared it with others,” he said. “This was never about the running, it was about meeting people, talking to people and the marathons gave me a hook which people have responded to.” 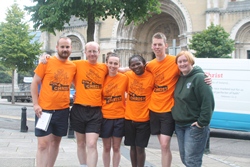 Alistair, who has just finished his first year at the Theological Institute, came up with the idea of running round Ireland to spread the Gospel three years ago. Before he began he described himself as ‘an enthusiastic and hopeful if somewhat ordinary runner.’

“Before embarking on the rigorous training schedule in preparation for this massive challenge, I had never run more than two marathons in a year,” he said.

He has managed to get through the challenge so far with no health issues except some soreness in his upper leg. “That cleared up after a couple of weeks thanks to a mixture of prayer and rest,” he said. The Run4Christ van which has accompanied him every day is equipped with an ice bath to help ease aching muscles.

As he neared the end of his epic challenge Alastair said the effort had been very worthwhile. 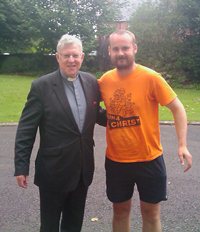 “This was a Gospel Run and I was supported by runners from all churches. I think people seeing something like this happening has been very positive for the church,” he said.

“When I get home it will take a few weeks to get my head round the whole thing and re–read our prayer diaries, blogs and accounts written by people who ran with us, but over the past two months I have visited places north and south I have never visited

“People who have joined me on the run have also had the chance to set their own goals and create their own personal records.”

On Friday morning Alastair and his team headed away from Belfast towards Portavogie, a mere run of 27 miles. His last week will be spent heading south towards the Run4Christ finish line in Crossmaglen.

Find out more about Alastair’s marathon challenge on  http://www.run4christ.org/