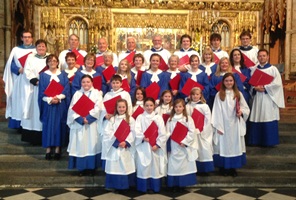 Report by the Rev Clifford Skillen

The choir of St Polycarp’s, Finaghy, sang Choral Evensong in Westminster Abbey, London, on August 19 and 20.

As far as can be determined, this was only the third time that a Church of Ireland parish church choir had been invited to sing services in the Abbey.

Conducted by St Polycarp’s Director of Music, Simon Neill, the choir sang special settings of Magnificat and Nunc Dimittis at each service and also two anthems: On the Monday, a setting – in Latin – of Balfour Gardiner’s Evening Hymn (Before the ending of the day) and on the Tuesday, Charles Woods’ O Thou, the central orb.

In addition, on the Tuesday, two of the young choristers – head chorister, Rachel Morrison, and Aidan McLean – sang part of Magnificat as a duet.

Choir members were joined at each service by family, parishioners of St Polycarp’s, friends and supporters, including some people now living in England who had associations with St Polycarp’s Parish and choir in the past.

On each day, more than 600 people attended the services, with long queues forming around the perimeter of the Abbey from 4pm for the start of the service at 5pm.

The Dean of Westminster, the Very Rev Dr John Hall, explained that since the Royal wedding in April 2011, the Olympics and the recent Royal birth the number of visitors, especially from overseas, to the Abbey and those attending the Sunday and weekday services had dramatically increased.

Reflecting on the experience, St Polycarp’s Director of Music Simon Neill said conducting Evensong in Westminster Abbey had been a dream come true!

“The hard work and dedication of our ever–growing choir secured this opportunity to sing in this historic Royal church,” he said.

“The music brought tears to many eyes, especially with a duet from two of our young choristers.

“The choir took the experience in their stride and it was my good fortune to stand in front of over 700 worshippers, including the Dean of Westminster, and conduct some spectacularly beautiful Anglican music.”

The rector of the grouped parishes of Finaghy and Upper Malone, the Rev Louise Stewart, said: “It was an incredible and extremely moving experience for me as rector to see one of my parish choirs participate in worship in one of the most famous churches in the world, the scene of Royal coronations and weddings, and to be part of a worshipping community which has for centuries sung the praises of our Lord in that magnificent setting.

“To see places only previously viewed via media like television or books, to stand on virtually the same spot where our future King and Queen made their wedding vows just over two years ago and to lose oneself momentarily in the beauty of music in praise of the Almighty will take some time for this rector to come back down to earth again.”

“On the Monday, after four long hours of practice, we were ready for Choral Evensong. As we robed, the excitement was building and the nerves kicked in, but once we started to sing, all the hours of practice were worthwhile and I think we did very well.”

“On the Tuesday, one of the choristers, Aidan McLean, and I had the honour of singing a duet from Magnificat in front of over 600 people.

Rachel added: “The trip has been the highlight of my time as a chorister.”

Following the final Evensong, the Dean of Westminster asked the choir to return again to sing in the near future.