Former Archdeacon goes over the top for Leah! 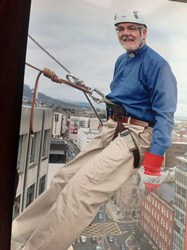 Between morning service and evening service on Sunday September 22 the rector of St Michael’s abseiled from the roof of Belfast’s Europa Hotel – as you do!

Former Archdeacon of Belfast Barry Dodds was part of a group of 13 to make this leap of faith. They were raising funds for St Michael’s parishioner Leah Batchelor who on September 24 2011 suffered a massive aneurysm which devastated the cells around her brain stem.

Leah, who was 21 at the time, was left with a rare condition known as locked in syndrome. Doctors said she would never walk, talk or even breathe by herself again.

But Leah is a fighter. She has defied the odds and although she uses a wheelchair and has a speech impairment, this month she returned to complete her final year of studies in graphic design at the University of Ulster. 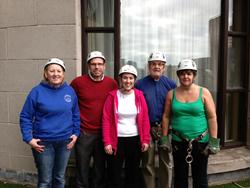 Barry said: “I have done some abseiling before and was familiar with all the equipment so I felt fairly confident even when it came to leaning back over the ledge. One or two others were very nervous but they were really great and went over the edge for Leah.”

Barry found he had to adapt his usual abseiling method of descent. “We were not able to bounce off the wall, but had to walk down instead. I just kept going and it was all over in two or three minutes.

“Leah’s mum Allison and brother Ryan took part and Leah and her dad Thomas were in Great Victoria Street cheering us on. I didn’t think I would be able to hear anything from the roof but when I stepped over they were all cheering from below.” 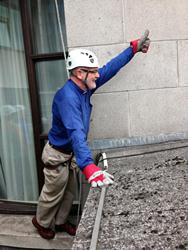 Barry said the funds raised from this white knuckle adventure will go towards specialist treatment for Leah. “The State and Health Service do a great job but cannot meet all Leah’s needs. This funding is to fill that void, and will help pay for the intensive physiotherapy that Leah receives when she goes to the Bobath Centre in London. She has already been there for two 10–day sessions and they have helped move her recovery on a little bit more.”

Anyone wishing to support Barry’s fundraising efforts for Leah can still make a donation which can be sent to him at 5 Sunningale Park, Belfast, BT14 6RU or paid directly into bank account sort code 08 91 03 account number 03354232. 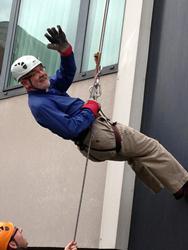