Growth is theme of 2013 Connor Synod 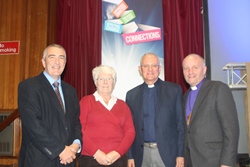 Around 300 people from right across the Diocese of Connor attended the annual synod for 2013, held in St Patrick’s Parish Centre, Ballymoney, on Thursday October 3.

A Service of Holy Communion was held in St Patrick’s Church, commencing at 3pm, and the business of synod was conducted in the Parish Centre with the first session lasting from 4–6pm and the second session taking place between 7pm and 9pm.

Keynote speaker was the Rev Canon Phil Potter, Director of Pioneering Ministry with Liverpool Diocese, and Avril Chisnall of Liverpool Diocese’s TANGO project also gave a presentation on how the project has reached into the heart of the community.

Prior to synod, Canon Potter also led a session for clergy looking at fresh expressions of church.

The theme of the presidential address of the Bishop of Connor, the Rt Rev Alan Abernethy, was growth. Conjuring up an image of vines in John’s gospel, Bishop Alan said: “Branches that decide to go it alone soon discover their mistake. But branches that remain in the vine and when necessary submit to pruning, live and bear fruit.

“To remain in him we must remain in the community that knows and loves him and celebrates him as its Lord. We can’t go it alone but we must remain as people of prayer and worship in our own private lives.

“The difficult and challenging part of growth is pruning, and yet a critical dynamic of growth. There is an intentionality about growth, it is something we must aim for and accept the consequences that will follow if we seek to grow. Growth has many facets to it and it is not only about growing numbers but about growing at every level of our community life. “

Bishop Alan spoke of the implementation of the diocesan Vision Strategy and its three strands – engaging culture, empowering ministry and effecting change. “The reason for giving shape to our strategy under these headings is that they came from our consultation process but the underlying focus is to help us look to the future with renewed hope, praying and working for growth,” the Bishop said.

Bishop Alan said as part of his commitment to encourage this aim for growth he would spend a week in a parish every year to teach, preach and spend time with people, seeking to encourage the parish in its work and witness, and he looked back on the time he spent in September in the parishes of Ballintoy and Dunseverick during their Sunflower Mission.

The Bishop revealed that the diocese had now appointed a children’s worker to its development team. “As we remember the findings of our diocesan survey it was very clear that the need for help, resources and support for children’s ministry was a priority across the diocese,” he said.

Bishop Alan said that the focus of his Lenten talks for 2014 would be discipleship and ministry. “This will focus on what we state that every baptised member of the church has a ministry and that ministry begins at baptism.”

He said there would also be a bishop’s training day for clergy in February on the theme of discipleship. “Individual and corporate discipleship are key elements for us as we seek to grow within our own parish communities but also as we seek to offer service to our local communities,” Bishop Alan added.

The Commissioned Lay Ministry scheme was also a possible way to grow and facilitate ministry, he said.

Other plans to help parishes look to the future with hope and expectation and to work and pray for growth included a structured parish and ministry development plan encouraging eight parishes to commit to engaging in three to four meetings collectively with the other parishes over the course of 2014 to engage in thinking about growth. The rectors of the parishes would also meet regularly as a group with the to think about personal development and ministry. This would be repeated in following years.

Bishop Alan continued: “For Easter 2014 I want to invite every parish to use Easter Day as a focus on baptism or renewal of baptismal vows. Focus on growth through mission and discipleship at Easter.” He said the development team would support parishes with materials.

The Bishop also proposed to focus on unity and celebration. “I believe passionately that we must find ways of sharing together across the diocese to help us in a unity of spirit and purpose,” he said.

“The prayer of Jesus was that his church should be one and on the birthday of the church around the time of Pentecost, we aim for a diocesan wide initiative of unity and celebration.” Precise plans for this celebration are yet to be confirmed.

Bishop Alan told Synod is had been a great personal joy for him to visit Connor’s link diocese of Yei in January. “There is something about South Sudan that is incredibly deep and important. I have never been anywhere else in Africa where every single person I met has a story of personal tragedy through civil war. They have suffered so much yet they have so much joy.”

The Bishop said a team from Connor was preparing to travel to Yei next year, and revealed Connor was currently examining the possibility of building another ward at the children’s clinic in Yei though no decisions have been made.

Bishop Alan said the Church of Ireland’s discussions on the subject of Human Sexuality in the context of Christian Belief continued to be important yet difficult. “The archdeacons are discussing how we can continue the discussions within our own diocese and we are part of a tripartite diocesan gathering that hopes to meet sometime next year,” he said. “Please continue to pray for the whole church that we can listen, share and pray together.

Concluding his address, Bishop Alan paid tribute to the archdeacons, his staff, his family, and to people for their prayers, affection and support.

“I find myself daunted and yet also encouraged not least because of the many, many people I meet in parishes who give so much and yet never look for any reward,” the Bishop said.

During the evening session, parish development worker Trevor Douglas, who took up his post just over a year ago, spoke about his role.

“Over the course of the last year many of you have invited me to become involved in helping you discover how this plan for growth can best fit where you are, some of you have been looking at your resources, others have been asking questions about your buildings and how they could be used outside of the normal ways,” Trevor said. “However all of your thinking has been around mission which I personally find very encouraging.

Trevor said he has also been working hard at developing new partnerships, connections and friendships that would assist Connor Diocese as it looks to the future. These include the link with Liverpool Diocese and Connor has also had conversations with the Diocese of London.

“These are two dioceses that in many ways are similar to Connor and have faced the sorts of issues that we are grappling with, so together we can learn and share so much from our common experiences,” he said.

“A bit closer to home is our friendship with our Catholic neighbours of Down and Connor in particular with The Living Church Project which is led by Father Alan McGuckin and Jim Deed who are with us tonight. This friendship has been very helpful and I look forward to it progressing further especially in the area of Community Relations which for all of us is a challenging one.”

The development officer outlined the importance of the children’s ministry project which been part funded by The Diocese and The COI Children’s orphan society.

“It’s my opinion that this is one of the most important projects that we as a Diocese can establish. If parishes are to grow then the ministry with Children must be one of the priorities,” he said.

The business of Synod, including acceptance of reports and committees, and consideration of communications from General Synod presented by senior registrar Canon Edgar Turner, and Notices of Motion were all discussed during the afternoon session. All were passed unanimously.

Following an enjoyable evening meal, the Ven George Davison, Archdeacon of Belfast, welcomed Canon Phil Potter back to speak about how Fresh Expressions of Church is making a difference to lives and to growth in Liverpool Diocese. Avril Chisnall of Liverpool’s TANGO project spoke passionately about how this enterprise, in its terracotta (orange!) shed has connected with many non–churched people and has really taken church out into the community.

The Rev Barry Forde, chair of the diocesan development team, led a session focusing on success stories from across the diocese. Dean John Mann talked about how the Cathedral had engaged with people coming into the Cathedral Quarter for Culture Night during September, an evening which saw up to 9,000 come through the Cathedral doors.

The Rev Patrick Barton talked about September’s Sunflower Mission in the parishers of Ballintoy and Dunseverick which had reached out to people wherever they were going about their daily business.

The Rev Bryan Follis spoke about his endeavour to bring about ‘every member ministry’ in his parish of All Saints. Belfast, where previously he said 20 per cent of parishioners were doing all the work and carrying the other 80 per cent. This is a figure he is attempting to reverse, so that he as rector can find more time to focus on growth rather than keeping things ‘ticking over.’

Ms Catherine Simpson, Ahoghill and Portglenone and a CITI ordinand, talked about the Energize youth project in the Rural Deanery of Ballymena, which had gone from strength to strength (she admitted the first get together had been a ‘disaster,’) and how its last meeting had attracted 50 young people from the rural deanery and their leaders. “We granted each other permission to take something on and recognised the gifts in others,” she said as she explained how the project had been turned around.

The Rev John Rutter told synod about the success of the Open Door project in Glenavy, where older people met to enjoy chat, games, crafts and lunch. He said this very active approach replaced a mid morning service that had been attended mostly by senior citizens but had always been ‘rather passive.’

Before closing synod 2013, Bishop Alan thanked the guests who attended who included The Most Rev Noel Treanor, Bishop of Down and Connor, and the Most Rev Tony Farquhar, both from the Roman Catholic Church; the Ven David McClay, from the Diocese of Down and Dromore; the Rev Adrianne Galligan and Mr Michael Webb, Diocese of Dublin, and the new President of Connor Mothers’ Union, Mrs Valerie Ash.