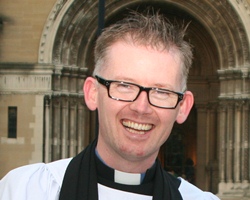 A study by the curate of Jordanstown Parish, the Rev Jonny Campbell–Smyth, has been included in a new publication.

The first of the new Braemor Studies Series was launched on Wednesday October 9 in the Church of Ireland Theological Institute.

The series of publications features the best of the final year dissertations by ordinands at CITI. The series was launched by Dr Christina Baxter, a former Principal of St John’s College, Nottingham, and currently an external examiner for CITI. The booklets are published by Church of Ireland Publishing.

Each of the studies began life as an MTh dissertation when the authors were still in training for ordained ministry. It is the intention of both Church of Ireland Publishing and CITI to continue the series with new publications each academic year.

The first three studies are New Monasticism – a Catalyst for the Church of Ireland to Connect with Society by the Rev Campbell–Smyth , The Place of Lament and the ‘Catharsis of the Complaint’ in Response to the Problem of Evil by the Rev John Godfrey who is curate of Galway and The New Masculinity Movement: a Viable Model for Engaging Men with God and the Church? by the Rev Alistair Morrison, curate of Ballyholme.

Their work has been published in order to broaden the reach of contemporary theological debate emanating from CITI. The series editor is Dr Susan Hood, Publications Officer and the series is available from the Good Book Shop in Belfast and the Representative Church Body Library in Dublin.