Reflections on unity at the World Council of Churches 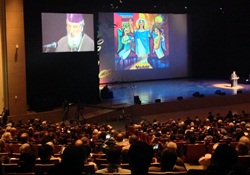 As the 10th Assembly of the World Council of Churches continues in Busan, Korea, the Bishop of Connor, the Rt Rev Alan Abernethy, reflects on worship and business.

On Tuesday, November 5, (Busan is nine hours ahead of UK time) he writes:

We began today with a call to worship on the gentle beating of a gong. The reading was from the Acts of the Apostles and the account of Pentecost. We sang a beautiful Kyrie from the Russian Orthodox, a song in English and Tuvaluan and a joyful feet–tapping song from Namibia. As always the Lord’s Prayer reminds us we all belong to Him.

The bible study was on Acts 2 and we reflected on the critical role of the Holy Spirit to bring unity to such a diverse collection of nationalities and languages. These people discovered together Christ’s resurrection presence and life bringing them into a new family.

At the beginning of the plenary we had greetings. We received written good wishes from the leader of the Focolare Movement. The executive director of the Lausanne Committee for World Evangelisation, Michael Oh, brought greetings and the request that there are continued conversations between his organisation and the WCC.

There were two main speakers and the first was Metropolitan Nifon from the Rumanian Orthodox Church. The church is not just an institution but a sign of God’s kingdom.

Our understanding of the Holy Trinity is foundational when we talk about unity. The real challenge is our ecclesiology as to how we can have so many churches. We must face our disunity with honesty. We accept the tension of our disunity but we work towards the restoration of the church. He asked for patience, passion and hard work. 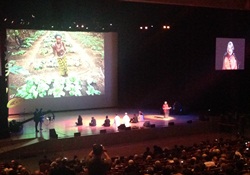 The Rev Dr Neville Callam, General Secretary of the Baptist Alliance, Jamaica, encouraged us to give thanks for what has happened already. He also suggested three challenges:
1. We need to find convergence on the sources we find authoritative.
2. We should foster theological thinking with our young people on unity.
3. Let us not limit our thinking and actions to being textual.
He also prayed God would keep us restless on our journey.

We all were asked to write our own prayer for unity and the session ended with some beautiful singing of Taize chants. There were two comments from a young theologian from South Africa that resonated with me. God who created can recreate. Hope and despair go hand in hand.

I took this afternoon off as I needed some time to catch my breath and rest. This is a wonderful privilege and joy to be here but it is exhausting. I will be back this evening for the business session.

Previous reports submitted by Bishop Alan (in chronological order) can be read below: 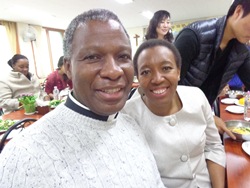 I have arrived safe and well after a long journey. Flew from Dublin to Amsterdam, Amsterdam to Seoul and Seoul to Busan. The time difference is 9 hours, my body clock is struggling as I have lost 9 hours somewhere.

My participation at the conference began this morning with prayers at 8:30. A fascinating new simple liturgical structure, with African singing and prayers in different languages concluding with the Lord’s Prayer said in our own native tongue.

This morning’s plenary was opened by a special visit from the Prime Minister of the Republic of Korea. Then followed a reflection on the church’s role in justice led by different speakers.

Two highlights were a presentation regarding HIV/ Aids and what has happened in the numbers of people treated and the hope that no child will be born with this disease very soon. Secondly a reflection on the theology of victims modelled and incarnated by Jesus.

It is only lunch time on first day so much more to come.

For lunch on Thursday I visited a ‘Pizza Hut’ and no it wasn’t a pizza but some spaghetti!

The afternoon continued with a business meeting of the Assembly. The main business was about the process of elections to various WCC committees and reports on how this would be taken forward. Over the next few days there will be nominations for these posts. It was interesting as I was able to exercise my voting rights as a delegate representing the Church of Ireland.

The afternoon also included a regional meeting of European delegates and an ecumenical conversation about theological education and ecumenical implications.

On Thursday night I managed to catch up on some of those lost nine hours jet lag.

Today (Friday) has started with morning prayer and a bible study form the book of Amos about justice.

We are at present receiving greetings from the Archbishop of Canterbury.

Friday morning bible study was based on Amos 5:14–24. This involved particular focused questions discussed in small groups and the cultural mix, denominational variation and the geographical spread makes these discussions fascinating, although there isn’t enough time for any great depth.

The following are two comments; “For Amos God is a god of relationship. “God’s frustration with His people is a moment of love and hope as He is unwilling to give up on His people.” The daily bible studies are each morning at 9:15 to 10:15 and they are preceded by morning worship at 8:30.

At 11:15 the main plenary session takes place and lasts until 12:15. Friday session began with some greetings and there was one from the Archbishop of Canterbury and one from the Chairperson of the Pentecostal Global Fellowship.

The session was led by people from Asia and focused our thinking on the theme of the conference; “God of life, lead us to justice and peace,” reflecting on this from an Asian perspective. There was singing, dancing, photographs and images from Asia on the large screens and it was very moving and informative.

We then all scrambled our way to find something and somewhere to eat, I settled for a sandwich and a bottle of water. After lunch there was another business session from 2:15 to 3:45. This involved a listening to comments on a statement drafted on unity, a discussion on the nominations to the Central Committee of the WCC, there are not enough nominations yet, and there are clear guidelines on representation on different issues including gender, age, region and denominations to name a few. There was also a report of the policy committee.

It was then time to leave to prepare for an evening for confessional meetings, so I went to an evening for Anglicans hosted by the Anglican Church of Korea. This involved some informal conversations at the tables we would later eat at.

A wonderful feast then followed and we were eating at 9:15. It was back to my accommodation after that for a night’s sleep and even better today was a day for relaxation and a short walk around the part of the city in which I am staying.

I am writing this late on Saturday evening after having put the finishing touches to my sermon which I had to write a script for as I am being translated. I am preaching in Busan Cathedral and the Bishop of Busan, Onesimus D. S. Dark, is celebrating Holy Communion.

We are then being entertained by the cathedral congregation and have an evening of cultural celebration in the conference centre to look forward to.

Back to business on Monday and five days of hard work before we finish.

The morning began at 8:30 with a very creative act of worship with a mix of songs, liturgy, prayers and a focus on the amazing gift of water and how it is so important as a symbol of blessing.

We were called to worship by Korean drums – quite a contrast to church bells. It is exciting to watch so many people from so many nations and tongues joining together to proclaim “Christ is Risen”. There is colourful dress, different languages, different traditions, rich mix of age and gender and wonderful sound when we all sing.

Coming from a small island it is exhilarating to be part of the rich tapestry of God’s family here on earth. We sang an African/American song in English and Korean, a Russian song in German and a haunting “Kyrie” in Indonesian as we remembered the victims of hurricanes and tsunamis.

The Bible Study was Acts 8:26–40 and continued the theme of living water. The passage was reflected on in the context of Early Church and Acts. There then was discussion about what it said into each of our contexts. It is amazing how the scriptures do have something to say to so many different people and situations. It was particularly challenging to hear the subject of living being discussed by people places where there is severe shortage of water.

Before the session began there were some greetings brought to the Assembly. There were greetings from the Lutheran World Federation, the World Evangelical Alliance and the International Jewish Community. The latter said something fascinating; “we are partners in waiting for the Messiah.”

The morning plenary had as its focus Mission. It was reflecting on this subject through the lens of a recent publication by the WCC entitled “Together Towards Life (Mission and Evangelism in Changing Landscapes). The session highlighted the common challenges and opportunities for mission, in light of the many global developments. We were urged to find ways of working together for a common witness.

This plenary was a done through presentations from speakers and interspersed with dance and drama from the “Teatro Ekyumenical”, a cultural theatre group of the National Council of Churches in the Philippines. They led the auditorium out to singing as we followed. There were some phrases that I found helpful during this plenary.

“Mission is finding out where the Spirit is and joining in.”
“We must look in the eyes of others as Jesus did.”
“Mission is rooted in the Trinitarian community that fosters sharing, justice and permanence.”
“Mission is also from the margin.”

After lunch there were ‘Mandang Workshops’ and there were 22 to choose from. I attended the entitled “Stop Climate Change Now! Save people’s environment and livelihoods”. This was a fascinating presentation based on ecumenical team visits to certain parts of the world and presented findings on the impact of climate change, environmental destruction and the exploitation of natural resources on people’s lives. This was fascinating because of the nature of this Assembly there were delegates here from some of those regions. It was obvious the people who are left to struggle most are the very vulnerable.

The ecumenical conversations that I attended to discuss effective leadership and the contextual ecumenical formation and theological education. This conversation continues to highlight one of the lessons of this Assembly and also one of the difficulties of what we are trying to do. Each and every culture is different – the context for how we are church in every culture and context has to be wrestled with by those in the context but it is enriched by having the conversation with others from different contexts.

Business Meeting. This took place at 6:15 in the evening and I have to confess my energy levels were struggling. This was the election results from the nomination committee.