St Anne’s Cathedral echoed with the joyful sound of dozens of young voices raised in song at the launch of the ambitious new cross community Choir School. Photo Gallery.

Young pupils from the three participating north Belfast schools took part in the launch in the Cathedral on Tuesday November 5 before a distinguished number of guests who included Dame Mary Peters, Lord Lieutenant of the City of Belfast; former Archbishop of Armagh Alan Harper, and a representative of the US Consul. 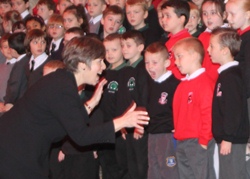 In seeking to build a new cross community Boys’ Choir, St Anne’s has reached out to the primary schools in north Belfast as it aims to create an ecumenical and cross–community ‘Choir School’ as part of the restructure of its music department. This does not mean building and establishing a brand new school, but (on the pattern of St Anne’s Cathedral in Leeds) it is forming a strong musical relationship with three local schools.

The schools – Edenbrooke Primary, Sacred Heart Boys’ Primary and Cliftonville Integrated School – will have one or more of the Cathedral’s professional singing tutors teaching singing in every class virtually every day. 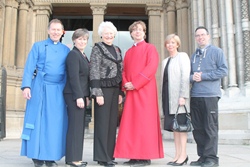 The Dean of St Anne’s, The Very Rev John Mann, said: “I believe that St Anne’s should not only have an open door to the people of Belfast, but an intent to take what we have been given in abundance to share with everyone – and especially with children.

“The Choir School project is close to my heart and will happen because of the vision of our musicians, the enthusiasm of the schools and the faith and courage of the Cathedral Board to resource it.”

Mr Jonny Manning, principal of Edenbrooke Primary School, said: “We are excited about the amazing opportunity that the Cathedral singing project will give our pupils both musically and educationally. This will provide our pupils with expert singing tuition in school but also the chance to be part of the Cathedral choirs. All of the school community is looking forward to getting started!”

The principal of Sacred Heart Boys’ Primary School, Mrs Patricia Quinn, said staff and pupils were delighted to be invited to participate in the Choir School. “This opportunity to be taught by professional musicians will give the boys more confidence and enhance their singing,” she said.

“The boys are very enthusiastic about this programme and are looking forward to visiting St Anne’s Cathedral over the coming months. I would like to thank the Dean of Belfast for offering Sacred Heart Primary School this marvellous opportunity and hope that the boys flourish from this experience.”

Ms Brenda McMullen, principal of Cliftonville Integrated School, said: “The staff and I are genuinely delighted that music specialists from Belfast Cathedral will come into school to work with our children and teachers.

“We are very privileged to have been selected and welcome the musicians into Cliftonville with open arms. There are many great singers in Cliftonville Integrated Primary School and they will benefit hugely from the enormous support the Cathedral will provide. We can hardly wait for the project to start.”

A selection of pupils from the three north Belfast schools sang at the launch of the Choir School in St Anne’s on Tuesday November 5. There were gasps from some of the small children as they took in the vastness of the Cathedral when they first walked in and realized this was where they would be singing. They truly rose to the occasion and were a credit to their schools as, conducted by Cathedral singing tutor Catherine Harper, they gave a beautiful rending of an African version of Incey Wincey Spider!

Around 60 primary school children took part in the launch – just a tenth of the number the project will reach – and they were joined by members of the Cathedral Girls’ Choir. This was formed in autumn 2012 and sang publicly for the first time at the Christmas carol services last year.

The Girls’ Choir has proved a successful cross–community group, and the girls come from a number of different schools in Belfast and beyond. The choir is already recognised for its high standard of singing, and has broadcast on BBC Radio Ulster, recorded part of a soundtrack for the Ulster Folk and Transport Museum, and taken part in several of the important civic services at the cathedral, including the World Police and Fire Games Memorial Service.

St Anne’s hopes to have the new Boys’ Choir together by Christmas. While the pupils taking part in the Choir School will be considered for the new choir, Dean Mann stressed that boys from all schools are welcome to audition when the choir is being recruited.

Master of the Choristers at St Anne’s is Mr Dave Stevens.