Pilgrims prepare for visit to the Holy Land

A group from the Diocese of Connor will travel to the Holy Land on Tuesday November 12 for an 11–day pilgrimage.

They will be led by the Dean of Belfast, the Very Rev John Mann, who led the first diocesan Holy Land pilgrimage in March 2011. The Ven Stephen Forde, Archdeacon of Dalriada, will represent the Bishop of Connor who is currently in Korea attending the Assembly of the World Council of Churches.

The 20 pilgrims from Connor will be joined by 11 people from First Larne Presbyterian Church. 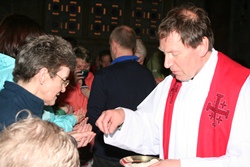 Their trip gets underway at Belfast City Airport, from where the pilgrims will fly to London Heathrow and on to Ben Gurion Airport, Tel Aviv. Their first two days will be spent in Jerusalem, followed by an optional trip to Masada and the Dead Sea. There will be a visit to Mount Zion and Bethlehem, and the Sunday will be spent meeting the people of Jerusalem at St George’s Cathedral, in the city, or on one of two optional trips.

On the Monday the pilgrims move via Caesarea, Haifa and Acre to Tiberias, and the second part of the pilgrimage takes in Jesus’s lakeside ministry, Nazareth and Northern Galilee before the pilgrims depart for home early on Friday November 22.

In Jerusalem pilgrims stay in the three star Golden Walls Hotel overlooking the city walls, and in Tiberias the hotel is the four star Ron Beach on the shores of the Sea of Galilee.