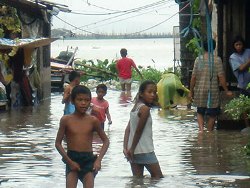 Parishes are reminded that the Church of Ireland Bishop’s Appeal is hoping special collections will be held on Sundays November 17 and 24 for relief in the Philippines.

In the wake of a typhoon which saw winds reaching 200 miles per hour hit parts of the Philippines causing flooding and extreme devastation the Bishops’ Appeal released €10,000 to Christian Aid partners on the ground.

This was sanctioned by Archbishop Richard Clarke and Archbishop Michael Jackson and will be used to provide tarpaulins, tents, food and hygiene kits to those who urgently need them.

People are being evacuated from severely hit areas. Initial reports that up to 10,000 people were feared dead have been revised with BBC News reporting on November 14 that Philippine President Benigno Aquino had stated the death toll from Typhoon Haiyan was more likely to be up to 2,500. 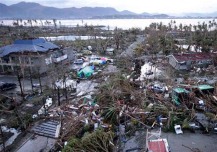 But the UN says more than 11 million people are believed to have been affected and some 673,000 displaced.

Parishes are urged to support the urgent appeal for help from the Bishops’ Appeal. To donate to this emergency relief response, please send funds to:

The annual Black Santa Appeal run by St Anne’s Cathedral, Belfast, has already sent £5,000 to aid agencies working with all those affected by Typhoon Haiyan.

The Appeal receives occasional donations throughout the year as well as in the run–up to Christmas and so was in a position to respond to crisis situations such as the horror the typhoon has left in its wake.

The Dean of Belfast, The Very Rev John Mann, said: “We have been moved and deeply saddened to hear of the huge loss of life and of the suffering to so many brought about by Typhoon Haiyan.

“While our prayers are with all those who have been affected by the disaster we hope that this donation will help at least in some small measure in the practical relief directed to the most vulnerable and will show the solidarity of the people of Northern Ireland with the people of the Philippines.”

The most recent issue of the diocesan magazine, Connor Connections (Autumn 2013), featured two stories with links to the Philippines. The International Justice Mission has offices and staff working on the islands, and in February Anne Brown, a parishioner with St Patrick’s, Coleraine, visited Cebu in the Philippines with IJM.

The magazine also featured Ady Comacho, a native of the Philippines who is currently working in Nepal, and who spent three months on the ministry team in St Patrick’s Ballymena, earlier this year.

Ruth Cooke, IJM UK’s Regional Development Executive for Ireland, said that all IJM staff and interns in the Philippines are safe, although one staff member had not heard from her family since Saturday and was travelling to find them. “Pray for her, and for our staff as they try and locate clients to find out whether they are safe. Communication is difficult too,” Ruth asked.

Canon Stuart Lloyd, rector of St Patrick’s Ballymena, said that Ady’s family had not been immediately affected but that Ady was understandably very upset for his countrymen.