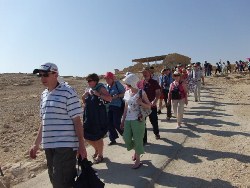 Connor pilgrims travelled to the Dead Sea and the historic fort of Masada on Friday November 15, as leader Dean John Mann reports in his latest blog.

I haven’t said much about the food yet, which is a bit of an omission, for it is really good. During the pilgrimage the hotels provide a large variety of food at buffet–style meals and lunches out are generally very good too. So, sustained by a hearty breakfast we travelled today to the lowest point on earth, the Dead Sea.

The ancient route from Jerusalem to Jericho as mentioned by Jesus in the parable of the Good Samaritan starts by climbing the Mount of Olives and going on via Bethany. Now Jerusalem is cut off from Bethany by the high concrete security wall, so no longer can the ancient path be walked.

We are on a modern dual carriageway going down and down through the dry and dusty hills of the Judean Desert to the southern end of the Jordan Valley. Here we find Jericho, Qumran (where the Dead Sea scrolls were written and found) and the Dead Sea, as well as King Herod’s desert fortress of Masada.

On the way we see the Bedouin tents and the women out herding the sheep and goats. They live as they always have in tents of camel skins – though the odd plastic sheet and satellite dish intrudes. The men work as labourers in nearby towns and cities.

Approaching through orchards of date palms we arrived at Qumran first – I always like our group to be first, though I am not in the least bit competitive! More coaches arrive soon, but we are on our way to discover the secrets of those who loved the desert life and sought the purity and prayer of an ascetic existence.

Maybe John the Baptist was one of this community before he went the short distance to the Jordan River to call people to repentance and baptism.

We moved on to Masada, packed like sardines and rising in a cablecar, we walked on the barren hilltop with other groups; large Americans in orange tee–shirts and blue baseball caps; colourful young Brazilians in matching scarves and some older French women oozing sophistication; yet here we all were in the warm sunshine considering the final onslaught of the Roman legions on the Jewish rebels in the 1st century AD.

Floating in the Dead Sea before lunch the pilgrims took a “you can take my picture, but not for the website!” approach to the unique experience of lying in water ten times as mineral rich as sea water, and seven times as dense. “At least there are no fish!” someone cried!!

Just Jericho, the ancient city to see, as we read of the blind men healed at the gates, stopped at the sycamore tree and thought of Zacchaeus, and overlooked the mountain of Christ’s temptations. We bought locally grown bananas and figs, and drank pomegranate juice and lemonade from Jericho fruit, before heading back into the desert.

We stood in silence off the road absorbing the sounds of the wilderness: in the distance a trickle of water, somewhere the cry of a bird, far off, is it traffic or the whine of a minaret? No matter, the sun is going down, the sinking light casting shadows on the dusty hills, and another day ends in the land of the Bible.

Previous blogs from the Holy Land by the Very Rev John Mann, Dean of Belfast