Menu
Home > News > The sights, smells and sounds of the Church of the Holy Sepulchre at dawn

The sights, smells and sounds of the Church of the Holy Sepulchre at dawn 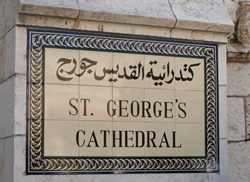 A number of the Connor pilgrims in the Holy Land had an early start on Sunday November 17, climbing to the Church of the Holy Sepulchre to experience the dawn services.

The Church of the Holy Sepulchre has several dawn services every Sunday: Roman Catholic, Coptic and Orthodox. To get there to experience even part of them means leaving the hotel no later than 5.30 a.m. Nine of us did just that this morning and so did a Polish group that is staying with us at the Golden Walls Hotel.

We arrived at 5.45 a.m. to find at least two hundred people there before us; eastern church priests in black from head to foot, women in long skirts and shawls, that they drape over their heads when approaching the holy sites within the church; the smells of incense, anointing oil and hundreds of candles mingle with the ancient stones, soot–darkened icons, lamps and lights, and many rich fabrics that are seemingly held together with the dust and grime of the ages.

Here and there pilgrims kneel on the bare stone; devotion such as we do not know; prayers murmured through silent lips; eyes raised intensely or cast to the floor in penitence. It is like another world and a privilege to share it even for an hour.

Later, and more in our comfort zone, the whole group attended Holy Communion at St George’s Cathedral. Here we had well–known hymns, a sermon on living the present moment and photographs in the sunshine of the courtyard.

Taking the Dean’s message to heart we proceeded to live the day, share with those we are with, and in love with those at home, and not think too much about tomorrow (for we leave Jerusalem then!).

After lunch we were picked up by the coach and were taken to the Israel Museum, where we viewed the amazing model of Jerusalem in Jesus’s day. It is fabulous. We also viewed a wonderful reproduction of the scroll of Isaiah as found amongst the Dead Sea Scrolls in 1947. The original is 2,000 years old and – prior to its discovery – the oldest extant copy of Isaiah was from the 10th Century AD. It was a pretty dramatic find, was it not?

We will be packing tonight and saying our goodbyes in the morning to the lovely staff here at the Golden Walls. But we have Galilee to come. I feel the boat gently rocking on the Sea already, the sight of Capernaum and in my mind’s eye I have the view from the mountains.

But, thinking again of the Dean’s sermon, let’s not leap on too soon, but thank God for the health and strength we have had in these Jerusalem days – and for all the wonderful people that we have met in the City that remains special to so many, whether Christian, Muslim or Jew.