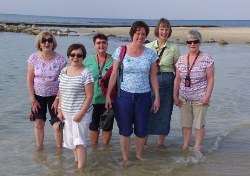 The group of Connor pilgrims in the Holy Land moved to their second base on Monday November 18, travelling to Tiberias on the shores of the Sea of Galilee.

They made a number of stops en route, as pilgrimage leader, Dean John Mann, writes in his latest report:

The pilgrims were packed up and ready for an 8am departure from Jerusalem and from the really friendly staff at the Golden Walls Hotel. We left with prayers for peace and safety on the roads.

On the way to Emmaus we learnt not only that there are three possible sites for the village, but also there are several different pronunciations of the word used by the Church, all of which are wrong. The correct way of pronouncing the word in ‘eyemwass’ we were told by our Guide.

Anyway Abu Ghosh, the site we went to, is a lovely place to worship; in a beautiful Crusader church with original frescos and an accoustic made for singing. ‘Father we adore you’ we sang as a round in a church entirely empty but for the 30 of us. As the sound reverberated around we sat in silence, having listened to the Emmaus road story and considered the importance of the account for our record of the Resurrection appearances of Jesus.

Brother Raphael served us in the shop – he and his fellow monks are of the same order of French Benedictines as Prior Mark Ephrem and his community at the Holy Cross Monastery in Rostrevor. So we exchanged greetings and spent some money – we have a little left – and returned to the coach for the journey to Caesarea.

This incredible site on the shores of the Mediterranean is important for all sorts of reasons (as we learnt in an extremely well made audio visual presentation) but for Christians it recalls us to the conversion of Cornelius – the story that we read in its entirety – and the imprisonment of Paul, later in the Acts of the Apostles.

The Roman theatre is where we read and sang, and, even with noisy school children on a trip out for the day – they were as full of life and fun as a school class anywhere in the world – the readers standing on the stage in the open air, we all heard quite clearly some distance away in the ‘stalls’.

Again we sang as the breeze gently caressed us from the sea and the sun was just warm enough for comfort in shirtsleeves and cotton skirts and trousers. Swallows and housemartins are on migration through the region and dozens of them wheeled through the sky above us – is it really November?

Turning north and driving through Haifa and under Mount Carmel in a new tunnel we arrived eventually in Acre, the last place that the Crusaders held before being driven from the Holy Land, finally, a century after Jerusalem had fallen. The extensive archeological remains are impressive, to say the least, but then that goes for all the Crusader buildings in the Holy Land. They built as if they intended to stay for ever – perhaps we do the same…

We arrived in Tiberias at 5.30pm. It was dark, and we had had our first rain of the trip on the way; the traffic had been busy too and the coach was heavy with sleep, so we staggered to our rooms flopped down for a while, but judging by the look of happy pilgrims at dinner, revival is never far from us!

Tomorrow [Tuesday] it’s Cana, Nazareth and the Mount of Transfiguration. Even for pilgrims used to multiple Biblical sites in a day that is a joyous prospect. We are so privileged to be here, and tomorrow should wake to the sight of the sun rising on the Sea of Galilee. Can it get any better?