Sunrise over the Sea of Galilee as pilgrimage continues 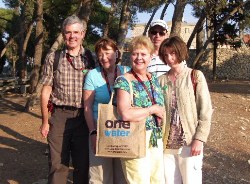 The Connor pilgrims in the Holy Land spent Tuesday November 19 walking in the places Jesus walked on the shores of the Sea of Galilee as pilgrimage leader Dean John Mann writes in his latest blog.

At 6.25 am the first sliver of the sun appeared above the Golan Heights and we had an uninterrupted view across the Sea of Galilee to witness it. It took four and a half minutes before the whole sun was sitting like a great burning ball on top of the hills.

The light made a path across the lake to our hotel, sparrows chattered noisily as if greeting the dawn, a small flock of egrets beat an elegant flight across the water, the swallows were already feeding on the wing and one of the staff of the hotel hosed down the patio as if nothing miraculous was happening. Well, of course he was right, the sun rises every day, and like our heartbeat it is only occasionally that we are conscious of it.

On the way to Cana, Samer our guide told us his Cana joke. This is how it goes: Joseph was recovering after the wedding feast and was a bit out of sorts the next day having drunk too much wine. Mary, feeling sorry for him that morning said, “Joseph, let me get you some water.” to which Joseph replied, “Thank you my dear, that will help, but keep the boy away from it!”

Alright, it was before 8.00 am and we were in receptive mood, so he got a good laugh at that, and the clergy present have it down as their sermon illustration for when Jesus’ first miracle appears next time in the lectionary. Just say, you have heard it before!

Actually, Cana was a really good visit. Though we arrived early, several groups were before us and we were given a small chapel in which to read and pray and sing. It had to be ‘Love Divine’ and we sang it as lustily as possible, even though I pitched it a bit high (the harmony was most impressive and I trust our CD sales will be good for Christmas!). Wine tasting before 9.00 am followed….

In Nazareth we visited another very special and atmospheric church. It is Greek Orthodox and built at the site of Mary’s Well. The spring of Nazareth that gave the village its water still flows and this Church is built over its source. The water runs and is available for us to drink.

To this spring Mary and the other women of Nazareth must have 2000 years ago; from this water Jesus must have drunk as a child and young man.

Samer painted a picture of the women gossiping at the well; exchanging news and speculating on the next thing to happen. Now in this place is a church, with icons and frescoes of such profusion, that an hour in the small shrine would hardly be enough to see them all properly.

With the Orthodox pilgrims we lit candles and prayed, sitting in the silence of wonder and the peace of a holy place, whilst the chant of the priests gently lulled us in contemplating how eastern Christianity has a mystery and awe that can live with a degree of liturgical untidiness, in its ease of deeply moving worship.

The main Church in Nazareth was our next visit. It is huge and impressive and here we read and sang again before leaving for the ‘Nazareth Village,’ which is a reproduction of Nazareth as it would have looked in Jesus’ time.

It is well done, and they have managed to avoid the theme park danger that was always the possible outcome of such an attempt. We saw an olive press, and had its workings explained, but all took pictures of the donkey hitched to the olive crushing mill, as we photographed the sheep and the goats too, in a pen below in the field. We were all given an oil lamp to treasure and remind us of Jesus, the light of the world.

All this and it was still only lunchtime.