Calm waters as the pilgrims sail the Sea of Galilee 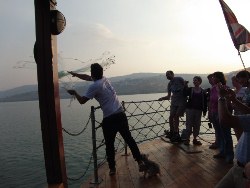 The Connor pilgrims experienced calm waters as they sailed across the Sea of Galilee on Wednesday November 20.

They also enjoyed peace and contemplation on top of the Mount of Beatitudes, remembering Jesus delivering his ‘Sermon on the Mount.’ Photo Album

The pilgrims had a lie in this morning. The alarm call was seven o’clock and we didn’t leave for the day until 8.15. We have heard that there is a little snow at home, but it is hard to take that in as it is like summer here, a slight haze across the water of the Sea of Galilee, but otherwise sunshine, warmth and blue skies. The sunrise was perfect; the breakfast great and the company of fellow pilgrims as happy as can be.

Today we drove to the northern end of the Sea of Galilee and climbed the small hill to the Mount of Beatitudes. The ‘Sermon on the Mount’ was given by Jesus in this place; and here a female Franciscan Community has established a most beautiful garden overlooking the lake.

There are quiet spots for contemplation; not just formal seats, but rocks and walls set at the right height for a pause for thought or prayer; fountains and flowers, lawns and paths, with the words of the beatitudes in Latin here and there.

The Church itself is of basalt, contrasting greatly with the Jerusalem honey–coloured stone that we have become used to over the past week. We read and prayed and walked and talked as well as dwelling in silence. As we left I met a lovely couple from St Ann’s Church in Texas who visited Ireland two years ago without coming north, but have promised to return and see our St Anne’s in Belfast. I hope that they do.

Returning to the shore of the Sea of Galilee we spent an hour at Capernaum. As with Emmaus two days ago, we were corrected for our English corruption of the name of the village: it is really (as on the road signs) Kafer Nahum.

Anyway, we read the stories of the house of Simon’s mother–in law, the call of the disciples and the healing of the centurion’s slave, then some of us sat down in a spot alone by the water’s edge. The glint of the sun on water can be mesmerising, whilst the boats some distance from the shore seemed to slip by without apparent source of power and still pilgrims of all nations throng these Christian sites and try to imagine how it was…..

Probably being by the Sea of Galilee gives us the greatest chance to see things through the same eyes as the people of 2000 years ago; not the buildings of course, they are either modern or in ruins, but the natural environment; the lake and the rocks and the hills. We moved a little further, to celebrate communion; singing and reading, with a joy in the resurrection appearance of Jesus to the disciples at this spot that filled us with renewed vigour and a sense of peace.

After lunch (of St Peter’s fish – found in the Sea of Galilee) we boarded a boat for our hotel from a jetty set amongst the reeds and scrub of a shallow stretch of shore. So perfect for wildlife it is not too surprising that we saw, in the space of a few minutes, all three species of kingfisher found in Israel – the Pied, the White–breasted and the Common Kingfisher (the only one seen in Ireland) and we climbed aboard the Jordan, our boat on the Sea that day.

It was calm as calm could be; the water so flat it looked as though you could walk on its sunlit surface; the engine purred quietly, and the captain’s Yorkshire terrier ‘Louis’ kept us amused and the cameras clicking. We were entranced by the Sea of Galilee really; these other things were incidental to the experience.

Then we stopped, far from the shore and in complete silence, as we read stories that we have known since childhood of the Lake that we were on and its storms and calms; of Jesus and his disciples, of fear and trust; of miraculous power and of awe.

‘Dear Lord and Father’ is the only possible hymn for this place. We sang it and prayed; watched a demonstration of the art of fishing in Jesus’ day, and the engines started again, as we proceeded to our hotel. There we relaxed; some pilgrims swam in the hotel pool, others read and chatted and rested before the evening meal. We were all filled up with the experiences of the day, shared once more in the land that Jesus walked.