Sober reflections for pilgrims at the Golan Heights 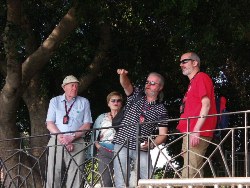 On their final day in the Holy Land, the Connor pilgrims reflected on the conflict in Syria as they visited the Golan Heights, occupied Syrian land still full of minefields.

Their final stop in this 10–day pilgrimage was the beautiful site that was once the city of Caesarea Philippi. Visit our Photo Album for the latest images.

In his blog written as the sun sets on the pilgrim’s final day, pilgrimage leader Dean John Mann writes:

I am sorry to rub it in, but a ninth consecutive day of warm sunshine, clear blue skies and light winds does make a difference to any pilgrimage to the Holy Land. I know, I know, we are about to be brought down to earth in more ways than one, but today once again we left the hotel travelling north to Caesarea Philippi.

Before leaving the lake we read the story of the feeding of the five thousand and contemplated the fish from the Sea of Galilee as well as the bread. Once more the water looked sublime and the glare from the sun upon it lit the whole scene. At this place there are the remains of an ancient harbour, the water level is much below that now, but a full three metres higher than when we were here two and a half years ago, following two wet winters.

Around ten o’clock we started our journey onto the Golan Heights. This area is occupied Syrian land and is still full of minefields (well marked!) and Israeli military camps, and we climbed steadily from 700 feet below sea level at the lake to more than twice the height of Slieve Donard at the highest areas of this mountain range. We stopped at a viewing place overlooking Syria and partook of a local delicacy, apples grown in local orchards dipped in grape honey from local bees. When I say local, I mean from the Golan Heights. This is a fertile and well–watered area as there are many underground aquifers. There are fields of apple, and cherry orchards and vines grow well here too. In the Spring–time people drive up into the hills to see the acres of cherry blossom and at this time of the year, it is for the fresh apples and for the honey.

We saw young men and women with mine detectors clearing an area of hillside. The mines are Syrian, from before the six–day war of 1967 when Israel annexed the Golan Heights for its strategic importance. There is now a buffer zone patrolled by the UN. It is a quiet border now, but in the distance, not that far from where we were standing there were puffs of smoke, reminding us of the internal conflict in Syria and the fact that as we sat and drank coffee and bought souvenirs people were dying. A very sobering thought indeed.

On a lighter note, the coffee shop that we were at was called “Coffee Anan”, “coffee in the clouds” it means, but it is a deliberate play on the name of the former UN Secretary General. They are proud enough of it to have a brown road sign marking it and directing people to it. The coffee was good too!

Our pilgrimage has taken us into this beautiful hill region, with its scars of battle, from the Fortress of Nimrod – a massive Crusader castle marking the furthest they reached to the north–east (they never took Damascus) – to the 20th century bunkers and shelled buildings of a much later conflict, because we wanted to visit the site of Caesarea Philippi.

This city in the mountains is where Peter confessed that Jesus was the Christ, the son of the living God. I like to finish a pilgrimage at this point with the question posed by Jesus to his disciples, “And who do you say that I am?’

Before travelling in his steps, the pilgrims could recite the answer to that question without hesitation; now it is no different, but it comes with the knowledge that we have worshipped and prayed, read and sung our way around the land that witnessed the events that convince us of this fact.

Today the city of Caesarea Philippi is no more, but the fresh water spring that made this a place of settlement still gushes forth and from the clear streams the pilgrims gathered “Jordan water,” for this is one of the sources of the river and it is crystal clean at this place. Chris Orr, a parishioner of St Paul’s Lisburn, was just filling a bottle when he received a text message to say that his niece has just had a baby boy – that was really good timing! Congratulations!!

We gave thanks for our baptism; the unwearied shoppers made a few purchases at the nearby gift shop and we drove down towards our lunch stop at a nearby kibbutz. On the way we looked across a high wire fence into Lebanon, the other neighbour of Israel on its northern border. In the distance Mount Hermon, snow–capped for three months of the year, but clear at the moment, reared its bulk partly in Israel, partly in Syria, and we settled to soup and salad, salmon, beef and vegetables. Thus restored, we made an early return to Tiberias and our hotel.

Pilgrims swam and walked, rested and partook of refreshment. Tomorrow is a very early start. The morning alarm call is at 3.00 a.m. – then breakfast for those who can face it – a two hour drive, and we are back to queuing with luggage, passports in hand, listening for announcements and everything else that is now covered euphemistically by ‘relax and shop!’