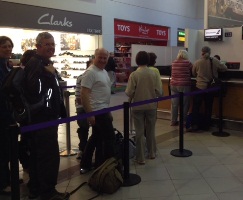 The Connor Pilgrims arrived home from the Holy Land on Friday November 22 after 10 sunshine filled days walking in the steps of Jesus.

Pilgrimage Leader Dean John Mann submits his latest blog chronicling the last morning in Tiberias and the journey home. Visit our Photo Album for pictures of the pilgrimage.

The Ron Beach Hotel was quiet at 3.15 a.m., so from the hotel balcony the Sea of Galilee was quiet too, just a gentle lapping; the lights across the lake, in nearby Jordan, twinkle in the darkness.

Meeting for breakfast of cheese or egg rolls, fruit (and cake!) and tea or coffee at 3.30 am, the pilgrims are surprisingly chatty and, on the whole, wide awake, but by the time we left at 4 am, the lights in the coach off, we subsided into silence for the journey to Ben Gurion Airport in Tel Aviv – a journey of a little over an hour and a half.

Here we said goodbye to our driver Kamal, who managed, during the course of the week, to take a 50–seater coach on manoeuvres I wouldn’t have attempted in my car. Particularly I remember him reversing the bus up a narrow entrance to a car park on Mount Zion in Jerusalem, which was up hill, round a bend and began at a sharp angle to the main road. Kamal managed it first time, without rearranging the street furniture.

Bags on trolleys, or wheeled behind us, we went through El Al security smiling sweetly, and there parted from Samer our excellent guide. He has been so helpful during the past 10 days, and we have learnt much from him. What I have really appreciated is his quiet devotion in places where we too have been visibly moved, but he has seen it all before, experienced these places many times, but still they mean something to him.

This belies the argument, often used against reciting the same prayers over and over again, that they lose their impact and become routine. Actually, at St Anne’s where we have the daily offices and a Eucharist each day too, I find that my concentration is helped by the daily reciting of the same canticles and prayers, rather than the opposite.

We were then on a mission to use up our last few shekels on coffee and snacks at the departures area, before boarding for Heathrow. So pilgrims second–breakfasted on anything from fruit to ice–cream. Everything has continued to go smoothly, and the very friendly El Al cabin staff made our flight back easy, and as pleasant as these things can ever be.

At Heathrow we had a bit of queuing, but there was time for reminiscing too, making little mental plans to meet up again, and contacting family and friends. This has been an exceptionally happy group of pilgrims; two thirds C of I, one third Presbyterian; Colin McClure, Minister of Larne Presbyterian Church and Stephen Forde, Archdeacon of Dalriada, representing the Bishop of Connor, have contributed greatly to the overall pilgrimage – and we have been one group – most of the time I couldn’t tell you who was C of I and who was Presbyterian, without making the effort to think about it. Isn’t that how we should be as Christians together?

Aer Lingus brought us from Heathrow to Belfast, and though there were a couple of delayed bags, which is annoying, but not too bad this way, otherwise everything has gone really smoothly.

We will be ready to debrief to anyone willing to listen, but be prepared to be enthused with the thought of going to the Holy Land yourself, if you have not been before. As we settle back home, it is with the sounds and smells of Jerusalem and the sights and peace of Galilee still in our minds, just waiting to be relived every time we sing that hymn or read that part of the Scriptures.

The pilgrimage goes on, as our lives are lived out each day, in the faith we have celebrated hour by hour in the land of our Lord’s birth, ministry, death and resurrection. A small chapter has been written in the lives of 30 pilgrims over the past eleven days – one that will not be forgotten – praise God for the chance to share these happy and holy experiences with others.

You can read all Dean Mann’s blogs from the Holy Land by visiting our archive via the news/events section of this website.