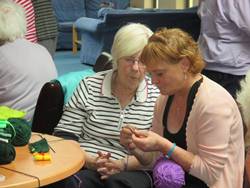 Members of the Church of the Good Shepherd, Monkstown, and their friends in St Oliver Plunkett’s Parish, Lenadoon, have come up with a really crafty idea for a unique Christmas tree.

For months the ladies of the two churches, one joint Church of Ireland / Methodist and one Roman Catholic, have been knitting green squares which will be fashioned into full sized trees!

This innovative idea has really caught people’s imagination and brought the communities together, as Priest in Charge of the Church of the Good Shepherd, the Rev Arlene Moore acknowledges. “In this divided society of ours wouldn’t it be great to have a Christmas tree which carried the real message of peace and goodwill at Christmas,” she said.

The trees will be available for viewing during Advent, and after Christmas the squares will be reshaped into blankets and distributed to charities.

Arlene tells the full story of the woolly Christmas trees below: 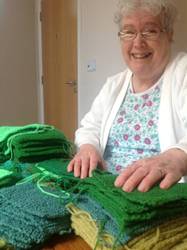 In Church of the Good Shepherd, Monkstown we have a weekly Thursday Craft and Fellowship Group which meets at 11am following a service of Holy Communion at 10am. This is open to the whole community and we have folks who come from a number of church backgrounds. We are always looking for new ideas for our programme. One of the leaders of the group, Mrs Joan Trew (pictured left) came across an idea for a creative knitting project which had been carried out by a Methodist Church in England: a full scale knitted Christmas tree.

Our church has also developed strong links with the RC parish of St Oliver Plunkett’s in Lenadoon and earlier in the summer a group from the Thursday Club had been over helping their Gardening Club prepare the grounds for Feile an Phobal, the West Belfast Festival.

Over the inevitable break for tea and scones the knitting project was mentioned in the conversation and it was so enthusiastically embraced by those present that we decided to work on it together. Rev Martin Magill PP invited Joan to come over to announce what was required at some of the Masses and as a result knitting needles started clacking all over Lenadoon, and it wasn’t long before plastic bags of beautifully knitted green squares started arriving in Monkstown. Many of those who were knitting were not even known to Rev Magill. 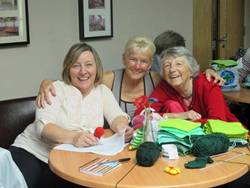 It seemed the vision of this knitted Christmas tree had caught the imagination of many people and we were onto something. In this divided society of ours wouldn’t it be great to have a Christmas tree which carried the real message of peace and goodwill at Christmas ? You cannot tell a Protestant square from a Catholic one !

The same enthusiasm for the project was shown by the people of Church of the Good Shepherd and indeed the people of Monkstown and the surrounding area generally. And soon it was plastic storage boxes that were needed to hold the green squares which were being knit on both sides of the religious and political divide and delivered to our church.

Exchange visits continued to happen with people going from one side of the city to the other all through the tensions and riots of the summer, bags of knitted squares in hand, of at least forty shades of green. 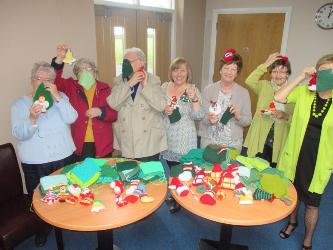 I was honoured to be the guest at the recent Living Church Diocesan Congress of the RC Diocese of Down & Connor and found myself having lunch along with Bishop Walsh, now retired. Introducing myself as being the minister from Monkstown I was taken aback when he said ‘Ah yes, the place of the knitted green squares!’ before proceeding to my shame to even tell me the pattern he’d learned by heart and the size of needles needed!!! It turned out his sister was one of the knitters inspired and involved in the project.

Seven months and over two thousand squares and hundreds of knitted tree decorations later we are now able to have one tree in St Oliver Plunkett’s, Lenadoon and one in Church of the Good Shepherd, Monkstown. We would like to thank Eglantine Timber for their help in providing wood from which to construct the frames needed to support the knitted components. 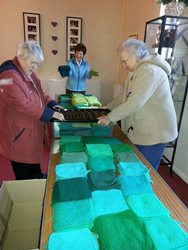 Members from both churches were involved in working together building the frames and decorating the trees in each other’s churches. It truly has been a joint endeavour knitting not only the squares but people’s lives together.

During the season of Advent (from Sun 1st December) the Church of the Good Shepherd will be opened every Wed and Thursday afternoon from 2–4pm to allow anyone who wishes to see our finished tree to come and do so. Of course there will be the usual tea and refreshments on offer. And probably a few sweets for kids. We really want to thank the people of both communities and both churches for all their hard work and want to allow everyone in the Borough a chance to see what is a very unique Christmas tree.

On Thursday December 19 the Thursday Craft & Fellowship Group of COGS and some of the members of St Oliver Plunkett’s, Lenadoon who have been involved would especially like to welcome anyone who wants to join them in a special coffee morning at 11am in Church of the Good Shepherd. The Mayor of Newtownabbey has kindly agreed to join us on that occasion as well.

After the Christmas season is over, many of the squares will be sewn together into blankets and given to charity eg the Philippines appeal.