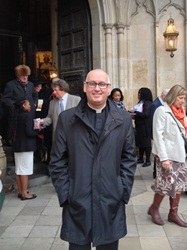 The Archdeacon of Connor, the Venerable Dr Stephen McBride, attended a service to celebrate the 60th anniversary of the National Churches Trust at Westminster Abbey on Thursday November 28.

Archdeacon McBride’s primary degree is in architecture and his doctoral thesis was a study of 19th century ecclesiastical architecture in the Church of Ireland. He is the clerical representative on the Ulster Historic Churches Trust.

“The occasion was a marvellous celebration of a very important milestone in the life of the Trust which has made grants to over 12,000 projects worth an estimated £85 million at todays’ prices,” Archdeacon McBride said.

“The funding has helped to secure the fabric of many of the most important historic ecclesiastical buildings in the United Kingdom.” 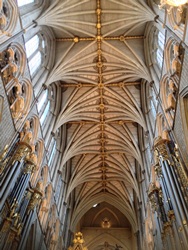 The special preacher at the anniversary service was the Archbishop of Canterbury and the Old Testament was read by Bear Grylls. Actress Geraldine James OBE read a poem by the former Archbishop of Canterbury, Lord Williams of Oysternouth, entitled: ‘Please close the door quietly,’ and the broadcaster Huw Edwards, a Vice–President of the Trust, interviewed three people whose parishes had benefited from restoration grants.

Archdeacon McBride, who was seated in the famous Poets’ Corner in the south transept of the Abbey, said: “I thoroughly enjoyed the privilege of being present on such an occasion where the pre–service music as well and the joyful singing of a cathedral packed with over 2,000 worshippers combined with the splendour of the architecture of Westminster Abbey made it a day that will last long in my memory.” 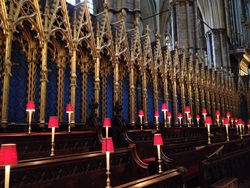