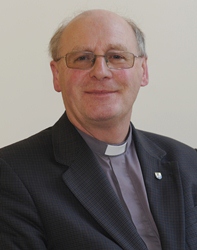 Canon George Irwin, rector of St Mark’s, Ballymacash, and Chairman of the Lisburn Christian Aid Committee, is to visit Zimbabwe next March.

The group, from different churches and communities throughout Ireland, will spend 10 days visiting Christian Aid partners around Zimbabwe. They will see how these local partners are empowering men, women and children to overcome the challenges they face and to bring about a transformation in their communities.

Canon Irwin has been a life–long supporter of Christian Aid and has served as Chairman of the Lisburn Committee since 1995. He is looking forward to the visit and the opportunity to witness the work of Christian Aid’s Zimbabwean partners first–hand.

Of Zimbabwe’s population of 12.6 million, around 45 per cent are malnourished, with a 2008 estimate putting life expectancy at birth at just 39. Conflict, bad governance and political unrest have all contributed to the poor health and education provisions, hyperinflation and collapse of many social services seen in Zimbabwe today.

Food production has fallen following a major land reform programme, leaving tens of thousands of farm workers out of work. These social and economic problems, combined with longer drought spells and other effects of climate change, have brought about a number of new and major challenges for the people of Zimbabwe and for Christian Aid’s partners.

Christian Aid has been involved in Zimbabwe since 1980 and now works with 12 local partners who run projects across the country. Christian Aid has strong relationships with Zimbabwean churches and partners, implementing projects which are concerned with a wide range of issues including food security, water conservation, education, HIV, health, human rights, gender equality and peace building. Canon Irwin and the team will be paying a visit to a number of these projects.

As part of their trip they will be travelling to the remote district of Binga, where Christian Aid partner ‘Open Schools Worldwide’ operates an educational programme for children. Many children in this area are forced to work or provide care for their ill parents or orphaned siblings; often they do not have the time or opportunity to attend school.

Motivated by their Christian faith, OSWW are responding to the educational needs of children shut out of the traditional school system or at risk of educational failure for reasons beyond their control. They work hard to bring education directly to those who need it, through training teachers and providing a ‘School in a Bag’.

In doing this they are able to meet the various, and often complex, educational needs of children across the different communities in Binga. Although fairly new, this is an exciting project to be visiting as it has proven highly successful in South Africa.

Canon Irwin is busy preparing for his trip and said he is looking forward to meeting with the individuals and organisations who are fundamentally changing lives for whole communities in Zimbabwe. He expressed his appreciation of all the encouragement and support he has received from the Diocese, the Parish of Ballymacash and the local community in Lisburn so far.