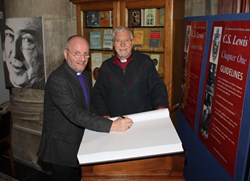 The Bishops of Connor and Down and Dromore have both added their reflections to the C S Lewis Book in Belfast Cathedral.

St Anne’s is marking the 50th anniversary of the death of the author with a specially commissioned leather–bound book which chronicles reflections on the impact of Lewis’ work.

The event is entitled ‘CS Lewis Chapter One,’ and is an open invitation to people of all walks of life to visit St Anne’s and record how they have been influenced by the renowned Belfast–born author.

The book has been crafted to resemble a leather bound book referred to in the Lion, the Witch and the Wardrobe. (‘…a whole series of rooms that led into each other and were lined with books – most of them very old books and some bigger than a Bible in a church’).

The Bishop of Connor, the Rev Alan Abernethy and the Bishop of Down and Dromore, the Rt Rev Harold Miller, called into St Anne’s together to pen their thoughts on the impact the writings of CS Lewis have had on them individually. 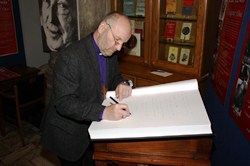 Bishop Alan wrote: “The writings of C S Lewis have been a constant inspiration and challenge to me on my journey of faith with Jesus.

Bishop Harold wrote: “C S Lewis is a son of the Diocese of Down & Dromore. That is a very humbling thought as the diocese prepares for a year of mission in 2015, because he is perhaps the greatest apologist for the Christian faith in the last century.

“However, his faith was not just something inherited – he did not wish to be confirmed in St Mark’s Dundela, where he had been baptised as an infant. It was conversion from his atheism by an encounter with the living God which changed things.

“In ‘Surprised by Joy’ he writes: You must picture me alone in that room in Magdalen, night after night, feeling, whenever my mind lifted even for a second from my work, the steady, unrelenting approach of him whom I so earnestly desired not to meet. That which I greatly feared had at last come upon me. In the Trinity Term of 1929 I gave in, and admitted that God was God, and knelt and prayed: perhaps, that night, the most dejected and reluctant convert in all England. I did not then see what is now the most shining and obvious thing: the divine humility which will accept a convert even on such terms.

“So never give up hope!”

The book will be circulated to parishes for people to add their thoughts on the great author, and will be open for the next year. Please contact Belfast Cathedral for more details.