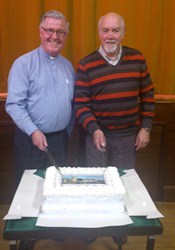 The present church was consecrated in 1813 but the site is much older, dating back to the 4th Century when it was a monastic site.

To mark the occasion the parish organised a number of events. These included a Scottish Ceilidh night with the Seven Towers Ceilidh Band early in September; a historical talk by Mr Roland Spottiswoode, well–known local historian and researcher; and a Stew Night in the parish hall with entertainment by Mr Matthew Warwick.

During that evening a Bicentenary cake was cut by the Rev Ian Magowan, rector of St Saviour’s, and the Rev Sam Jones, a previous rector.

To conclude the celebrations a special Service of Thanksgiving was held on Sunday October 6 at 7pm, led by the rector. The guest speaker was the Rt Rev Alan Harper OBE, former Bishop of Connor and Archbishop of Armagh. This was well attended by local dignitaries including Mrs Joan Christie, Lord Lieutenant of County Antrim and her Deputy, Mr Stephen Montgomery and the Lord Mayor of Ballymena; clergy, friends and members of the congregation. 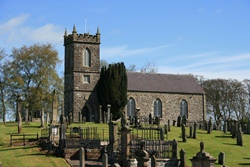 Lessons were read by the Rev Canon Terry Scott and the Rev Sam Jones, former rectors of the parish. Special music was provided by the church choir and a duet was sung by Lee Redmond and Grace Magowan. The organist was Mrs Emma Colgan who trained the choir.

After the service everyone had supper in the church hall. The rector and Vestry would like to thank all those who helped with the celebrations in any way making the events so memorable.