Black Santa pops in to visit lady who knit his famous scarf! 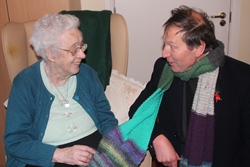 Belfast’s Black Santa, the Very Rev John Mann, took a break from his daily sitout on the steps of St Anne’s Cathedral on Friday to visit a very special lady.

Thanks to Florence Ringland, aged 95, Dean Mann has had a nice warm neck over the three years that he has been Black Santa.

Florence lives in the Bethany Nursing Home in Osborne Park, where Dean Mann held regular services during his time as rector of St John’s, Malone. She began knitting the lovely multi–coloured scarf for the Dean when she first heard he was leaving for St Anne’s, and had it finished in time for Dean Mann’s first sitout in December 2011. 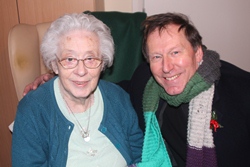 And Florence’s needles have produced what has probably become the most famous scarf in Belfast at Christmas time, as Dean Mann has worn it with pride every day on the Cathedral steps and for numerous photo shoots and television interviews!

Florence was delighted to see Dean Mann when he called in on Friday afternoon, and he was able to tell her that this year’s appeal had that day passed the £100,000 mark.

The Black Santa sitout for charities, which began on December 16, continues at St Anne’s on Saturday and finishes on Christmas Eve.