Menu
Home > News > Meeting to debate ‘Should Churches be Converted?’

Meeting to debate ‘Should Churches be Converted?’ 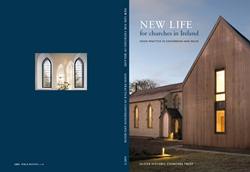 The Ulster Architectural Heritage Society invites members and non–members to participate in a discussion on whether or not it is right to convert redundant churches to new uses.

In November 2012 the Ulster Historic Churches Trust (UHCT) published New Life for Churches in Ireland – good practice in conversion and reuse. In the Preface the Chairman of the Trust, Primrose Wilson, stated that ‘Ireland’s ecclesiastical buildings are part of the backdrop and fabric of our lives….. Fortunately the majority of our churches remain in use as places of worship and are well–loved and respected in their communities.’

However when a place of worship becomes redundant it can be demolished (if it is not listed) or become a decaying object of pity. Converting it to a new use may well breathe new life into the community of which it forms a part or it is better if it disappears altogether?

The Trust hoped that its publication will raise awareness of the issues and stimulate further debate and discussion and this event in St Thomas’s forms a part of this dialogue. Copies of New Life for Churches in Ireland can be purchased on line at www.ulsterhistoricchurches.com and will be for sale on January 30.

The Society is delighted that the Venerable Dr Stephen McBride, Archdeacon of Connor, will act as Chairman for the evening. In order to set the scene Primrose Wilson will explain the rationale behind the publication.

Dr Paul Harron, Editor and author, will then outline the successful conversion of the former Fransiscan Church in Drogheda. Visited by UAHS members in 2013 it has become the Highlanes Gallery and is well used by the local community.

Nathan Armstrong who was the architect for the conversion of Tattykeeran Church, near Brookeborough, Co.Fermanagh, runner–up in the 2012 BBC Northern Ireland House of the Year programme, will present his project. Then the floor will be open for discussion and debate.

St Thomas’s Church was designed by John Lanyon and consecrated in 1870. It is located at the junction of Lisburn Road and Eglantine Avenue. In 2008 major renovations were carried out and it is now frequently used for a variety of community uses as well as being a place of worship.

The Society is grateful to the Rector and Select Vestry for the use of the building for this event. The cost of the event, which includes a glass of wine, is £10 per person. Closing date for applications is January 27 2014.