Celebrations for GB and BB at St Columba’s, Whiterock 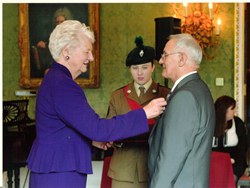 The Girls Brigade has celebrated its 20th anniversary. In 1993 there were no youth organisations for young girls at St Columba’s. Recognising the increasing need in the parish for something for young girls, four Girls’ Brigade Officers from a neighbouring church, two of whom were parishioners of St Columba’s, formed the 150th Girls Brigade Company.

In April 1994 the parish held its first company night and on that first evening 63 young girls came along!

Over the next 20 years, the company grew from strength to strength. Competitions were entered, new officers appointed, displays enjoyed, sleepless nights at camp, friendships blossomed, but above all girls and young women grew to Seek, Serve and Follow the Lord Jesus Christ.

There have been some challenges along the way, but there have also been many blessings, not least watching so many young girls with a Godly foundation growing into responsible young adults.

Today St Columba’s GB Company has a membership of 110 girls. The company looks forward to the future, while embracing the memories of the past. St Columba’s is celebrating this milestone with various events throughout the year, the highlight being the20th Anniversary Display in May, when the girls hope to be joined by special guests and past members.

The Boys Brigade at St Columba’s also had an exceptional year as it marked a special moment in the life of one of its leaders. Vaughan Rosbotham, Captain of the 115th Boys Brigade, was awarded a British Empire Medal for services to Young People in Northern Ireland in the Queen’s Birthday Honours.

Vaughan is the longest serving Officer in the company, having joined it at its foundation in 1956. He has been the Captain since 1971.

To mark the occasion and to pay tribute to Vaughan for his many years of dedicated service to the company, Minister of St Columba’s, the Rev Chris Easton presented him with a gift of an inscribed clock from the church members at the annual Enrolment Service.