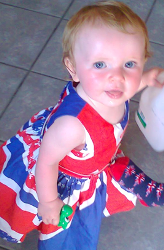 Parishioners in Magheragall raised £1,050 for the Scottish Cot Death Trust at a Service of Nine Lessons and Carols on December 22.

The Rector, the Rev Nicholas Dark, and the Select Vestry decided to give the parish the opportunity to support Scottish Cot Death Trust through a special collection at the service, commemorating a lovely little girl.

Isla Nancy Rose Brash, the daughter of Michelle Chambers and James Brash, died on August 16 2013. Isla was born on June 5 2012. Many Magheragall parishioners know Michelle well; she was a member of the congregation from birth until she moved to Scotland.

Isla and her family last visited her grandparents Lawrence and Carol Chambers in July and many parishioners remember Isla visiting the Church Hall with her family on the 12th. The news of her death in August was met with great sadness and heartfelt sympathy for her whole family.

Magharagall Parish responded by offering parishioners the opportunity to donate to the Scottish Cot Death Trust in memory of Isla. In Scotland every nine days a baby or child will die of cot death and the majority of their families will never know why they died. The Scottish Cot Death trust funds research, supports bereaved families and educates the public and professionals about cot death.