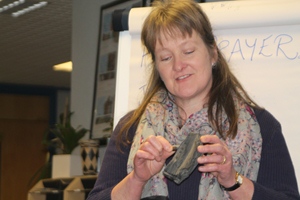 A bullet lodged in a lump of charcoal was a stark reminder of the conflict people in South Sudan lived with for many years and are facing again today as the Connor Yei team met for a time of prayer and sharing.

The team, led by the Bishop of Connor, the Rt Rev Alan Abernethy, and CMS Ireland Partnership Co–ordinator Jenny Smyth, was due to depart for Connor’s link diocese of Yei in the southern region of South Sudan on January 16. The trip was this week postponed due to ongoing unrest in South Sudan.

A meeting on Tuesday night, January 7, was meant to be the team’s final training session before the 10 day META (Mission Experience Team Abroad). Instead it focused on prayers for our friends in South Sudan, and provided an opportunity for the Connor team, and a team for Down and Dromore Diocese whose visit to Maridi Diocese has also been postponed, to share what they know of the situation in our partner dioceses.

Jenny found the bullet lodged in the charcoal as she was preparing to light her charcoal oven one day during her years living as a CSM Mission Partner in Yei. It was one of a number of objects to focus thoughts and prayers on that land many thousands of miles away. 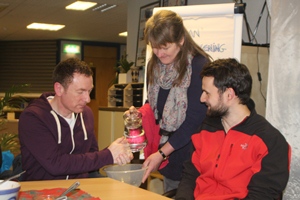 South Sudan is the world’s newest state, gaining independence in July 2011. The country has been peaceful since the signing of the Comprehensive Peace Agreement in 2005. Before that the people of southern Sudan had endured two civil wars. The first raged for 17 years and ended in 1972, but a second broke out just 11 years later. During its 23 years, 1.9 million civilians lost their lives and four million were forced to flee their homes.

Connor signed a five year partnership agreement with Yei in 2007. This was renewed for a further five years when Bishop Alan visited Yei in January 2013.

A number of Connor teams have travelled to Yei Diocese over the years, and Connor funded the building of a school in Mongo village. Bishop Hilary Luate Adeba of Yei has visited Connor many times. 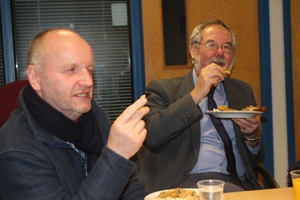 On Monday January 6 Bishop Hilary confirmed to CMSI that Yei Diocese had decided to postpone its planned Youth, Clergy and Young Family Members conferences, which would have been supported by the Connor team. The decision to postpone the META was then taken by Jenny Smyth, Bishop Alan and CMSI Mission Director Ronnie Briggs.

Members of both the Connor and Maridi teams attended Tuesday night’s meeting and shared a Sudanese meal prepared by Gillian Maganda of CMSI. Welcoming everyone, Jenny said: “I am really encouraged by the commitment you have shown in coming here tonight. To be able to come and share with others who have concerns in their hearts is a blessing and tonight we think about people who cannot eat, who don’t have a safe place to sleep or who have lost family members.” 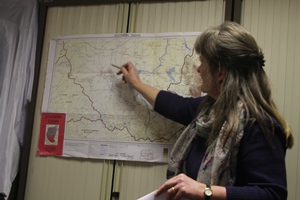 Jenny outlined how fighting had first broken out in the capital Juba in mid December, quickly spilling into tribal differences between the Dinka and Nuer tribes. She said that over the previous weekend there had been incidents in Yei and Morobo, between Yei and the Uganda border. The road from Yei to Juba and from Yei to the Ugandan border had closed for a time, making the southern area of South Sudan more volatile and vulnerable.

She told the team members that the Bishops of Yei and Maridi could not guarantee their safety. “We would also take up beds in the guest houses at a time when the church needs to use all its spare capacity for the refugees who are leaving their homes in vulnerable rural areas and seeking shelter in the church and its buildings.”

Jane Corbett, Dromore Cathedral, who was leading the Maridi team, confirmed that she had received news that refugees were already moving into the town, which is west of Yei and close to the border with Democratic Republic of Congo. Already there was a shortage of essential commodities and prices were rising, she said. 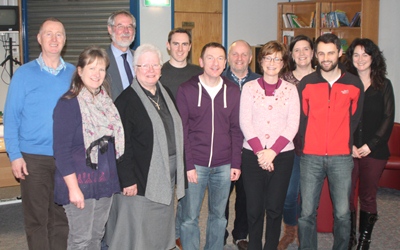 In the midst of the bad news, a communication from Peter Aloro, a youth leader in Yei, revealed that a Scripture Union conference held in November had 508 participants. “God healed one lady who was lame and walked and over 100 youths gave their lives to Jesus,” Peter said.

He expressed disappointment about the postponement of the January youth conference. “Given the current situation we could not continue with preparation because some people from Yei are going to villages for safety and others are going back into exile,” Peter said.

Bishop Hilary said that he was sorry that the conferences and Yei META had had to be postponed.  “We were prepared in mind and heart to welcome the team to Yei and to have a moment of reconnection with Connor/CMS Ireland. By now we should have been busy putting last touches to the reception plans. However, the postponement is, in my mind, something temporary.” 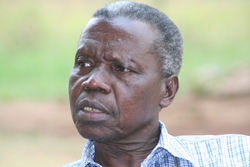 He said there must be hope – even in the ‘messiest situations.’

“By the grace of God and the efforts of those good people, we will manage to move beyond our divisions and to begin to develop a shared vision for the future of the whole country of South Sudan. It will take us a long time and there will be a heavy price at the end of it in terms of human suffering. It will take years to raise the same number of those killed in three weeks and to rebuild. It is easy to destroy but hard to rebuild,” Bishop Hilary said.

But, the Bishop added, light will overcome darkness. “We still feel that the crisis in our country will soon be over and the church and the country return to normal life.

“The only public statement a person at my level can make is to urge our partners to influence their representatives in their respective countries to lobby their governments to join hands with other bodies like UN, EU, IGAD, AU and many others to push for an immediate ceasefire and cessation of hostilities.”

He added: “The humanitarian situation is very precarious. There are hundreds of thousands of displaced people. Some are sheltering in church buildings without food, water and medical care. We do not know what to do. The Diocese of Yei is still assessing our needs. We will share this when we are sure about the situation.”

Bishop Alan said he was in direct personal contact with Bishop Hilary. “I am very disappointed about the postponement of the META but am thinking about how Connor as a diocese can respond. We are very concerned about the people of South Sudan and I would urge people to please pray for them.”

Before Tuesday night’s meeting ended, members from both the Yei and Maridi teams joined together for a time open prayer for all those living and working in South Sudan. 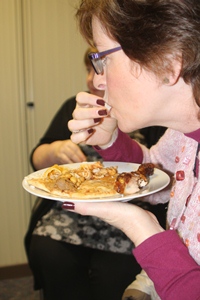