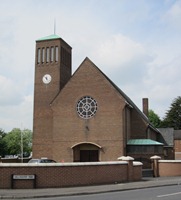 The Bishop of Connor, the Rt Rev Alan Abernethy will be the preacher at the 11am service, when representatives of the local community will also be in attendance. An anniversary plaque will also be dedicated by the Bishop.

The invitation is extended to all friends of St Paul’s both in Lisburn and Connor Diocese to attend the service and enjoy a reception in the church hall following worship.

The rector, the Rev Canon James Carson, said: “St Paul’s is 50–years–old and as a congregation we have much to celebrate in our life and witness together.

“St Paul’s came about through church extension in the late 1950s as the inspiration and vision of Christ Church Parish, on the Hillsborough Road, Lisburn. The church in that day was responding to the obvious and growing need in the new housing areas which at that time were to make up St Paul’s Parish. The ground upon which St Paul’s stands was purchased and a congregation began to worship in temporary buildings in 1962.”

In May 1962 the Rev Canon Ken Cochrane became curate in charge of the new district of St Paul’s. The foundation stone of the present church was laid in November 1962 and the church was consecrated on January 25 1964. The building cost £40,000.

Canon Carson was instituted in June 1999. He is assisted by the curate assistant, the Rev. Stephen McWhirter, who was ordained as a priest in December 2013, and two lay–readers, Mr Jim Neill and Mr Mark Jamison. Canon Carson was appointed as a Canon of Christ Church Cathedral, Lisburn in 2011

“This history is our inspiration today to continue to live out that vision and to continue to reach out to those who surround us in the area and changed community in which we are situated,” Canon Carson said.