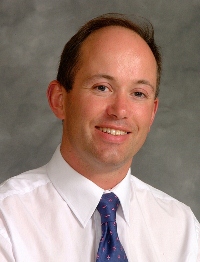 Professor Patrick Morrison, a parishioner of St John’s Parish, Malone, has been awarded a CBE in the Queen’s New Year Honours list.

Professor Morrison is a consultant clinical geneticist, with a special interest in cancer genetics, at the Northern Ireland Regional Genetics Service at Belfast’s City Hospital. He holds honorary professorships in Human Genetics from Queen’s University and the University of Ulster.

He was awarded the CBE for services to healthcare in Northern Ireland.

Professor Morrison, 50, is married to Anne and is father to Richard and Peter. He grew up in the Ballymacash area of Lisburn and when he was younger was a parishioner of St Mark’s, Ballymacash, where his parents still worship.

He said he was surprised and honoured to receive the CBE. “I’m sure it is for all the work I’ve done for patients with difficult genetic disorders over the last 25 years here,” he said. “I introduced the concept of preventative surgery for patients with hereditary thyroid cancer based on DNA testing in 1990 in a family from County Antrim, and set up our familial cancer service in 2000.”

Professor Morrison said in the early days people were reluctant to have preventative surgery because they felt it was too radical or too frightening, but things had changed.

“Since Angelina Jolie had her preventative surgery for hereditary breast cancer last year, we’ve been inundated with enquiries although already nearly 2,000 people have been tested for hereditary breast cancer genes in Northern Ireland over the last 12 years and several hundred carriers have had early diagnosis and preventative screening,” he explained.

“I also run clinics for patients with terrible neurological disorders including Huntington disease and different types of ataxia and muscular dystrophy.”

“My CBE was a great honour but as I came into work on the morning after the news was published, my clinic in Royal Maternity Hospital on Tuesday December 31 had eight ladies all of who received bad news about the pregnancies they were carrying.

“That, along with the three urgent ward referrals early that morning in the children’s hospital sorting out all sorts of problems quickly meant that my head was back to normal size within minutes of entering the hospital – the coal face of the NHS is a great humbler.”

He said his was a great job to do. “A large part of it is reassurance, when we can tell people they don’t have a particular gene. But if we find they do, we can take steps to prevent illness occurring. In some cases, like Huntington’s, there is no cure, but we can help people to prepare better for the future.”

Professor Morrison added: “I always think everyone entering the hospital is under great stress and pressure and the least any one in my position can do is to shake hands, say hello and try and explain simply what is happening as often reassurance is all patients need from a caring professional.

Professor Morrison, who plays piano and enjoys reading and listening to music in his spare time, is looking forward to receiving his Honour at Buckingham Palace later this year.

Professor Patrick J Morrison MD DSc FRCP FRCPI FRCPCH FFPHMI is a consultant clinical geneticist with a special interest in cancer genetics, at the Northern Ireland Regional Genetics Service. He qualified MB BCh BAO in 1986 and MD (by thesis) in 1993, and recently was awarded his Doctor of Science degree from QUB – the highest degree possible in medicine and science. He held molecular biology and neurogenetics research fellowships from the Royal College of Physicians in Ireland from 1991–1994. He is a member of the World Federation of Neurology Research Group in Huntington Disease, and a steering group member on the International Collaborative Group on Familial Breast and Ovarian Cancer (ICG–FBOC).

He holds honorary Professorships in Human Genetics from Queens University Belfast, and the University of Ulster and latterly from Nottingham–Trent university. He was President of the Irish Society of Human Genetics (2003–2005) and was editor in chief of the Ulster Medical Journal from 2005–2009, and is an associate editor of the Oncologist. He has published over 300 peer–reviewed papers on all aspects of genetics, particularly late onset diseases, familial cancers, and insurance issues, and has written several book chapters and co–authored two genetics textbooks. His current research interests include endocrine and renal cancer genetics. His research on giants was shortlisted for the prestigious Times Higher Educational Supplement award in November 2013 in London.

He was a non–executive director of the National Institute for Health and Clinical Excellence (NICE) from 2007–2013.