Magheragall parishioner raises more than £100,000 for charity during year as Mayor 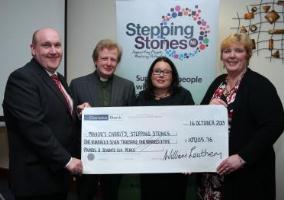 A Magheragall parishioner and former Mayor of Lisburn has raised more than £100,000 for local charity Stepping Stones.

Alderman William Leathem presented the cheque for £107,105.76 to the Lisburn based charity at a reception hosted by the current Mayor of Lisburn, Councillor Margaret Tolerton, at Lagan Valley Island.

Alderman Leathem, who was Mayor of Lisburn City Council from 2012–2013 said: “I was delighted to present a cheque to Stepping Stones, which was my official Mayoral Charity during my year in office. I am absolutely overjoyed. This is a magnificent amount of money and I was completely overwhelmed when we actually totalled the amount to £107,105.76.

“I know this amount of money will be of a tremendous help in Stepping Stones’ future endeavours across the Lisburn Community.”

Alderman Leathem thanked all the people, organisations, and local groups, who had made this ‘staggering contribution’ to this local charity possible and given it a legacy for the future. He paid tribute to his wife Kathleen, former Mayoress, who helped him in all his Stepping Stones’ endeavours.

“I was completely overwhelmed with the kindness and generosity shown to me in my quest to raise funds for Stepping Stones to develop its contribution across the Lisburn society by so many members of my own congregation of Magheragall Parish Church,” Alderman Leathem added.

“I had a tremendous year as Mayor and worked very hard with the many people who helped and assisted me and I am so pleased all that effort paid off so handsomely.”