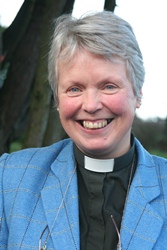 A retired Connor rector is undertaking an investigation into the extent of human trafficking in Northern Ireland.

The Rev Frances Bach, former rector of Armoy, Loughguile and Drumtallagh, has been asked to investigate the issue by the Anglican Communion.

She is appealing to clergy in Connor and other northern dioceses to speak to her about any contact they may have had with victims of human trafficking, or any awareness they have of incidences of this in the area in which they minister.

In a statement requesting support in this project from Church of Ireland clergy, Frances said: “Did you know that human trafficking is a huge industry in Northern Ireland? And that you probably walk past trafficked humans, or premises in which they work, far more often than you imagine? And that the level of demand in Northern Ireland for one of the industries trafficked humans work in, prostitution, is per capita among the highest in Europe?”

She explained how she got involved in this project. “When I retired from ministry in Connor a year ago, I wanted to find some small, unlikely cause or charity where I could perhaps make a difference to one person. I chose trafficked women – a cause which sadly turns out to be neither small nor unlikely.

“I have been asked by the Rev Terrie Robinson, women’s desk officer and networks co–ordinator at the Anglican Communion office in London, to collect information about human trafficking, and responses to it, in Northern Ireland.

“I am working my way through organisations such as the PSNI, NGOs and charities, but I also need to find out what Church of Ireland members are doing, whether as individuals, parishes or dioceses.

“If your parish, or anyone in the parish, is involved in combating Human Trafficking, I would be very grateful if you could tell me about it. Everything will be treated as confidential. Our phone number is 028 2075 1081, my email is frances.bach@btinternet.com and our address is under my name in the church directories.”