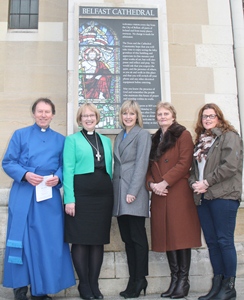 At this, cheques raised by the 2013 Black Santa Appeal were distributed to the charities, who work with children, young people, families, communities, and in medicine and international relief.  Visit our Photo Album.

The Black Santa Appeal 2013 raised a total of £196,000. Welcoming everyone to the service, the Dean of Belfast, the Very Rev John Mann, thanked the public on behalf of his team for their generosity.

In keeping with a tradition which began in 1976, Dean Mann and members of the Cathedral Chapter sat out on the Cathedral steps in the week before Christmas, wearing the black Anglican clerical coat which earned Dean Sammy Crooks, Belfast’s first Black Santa, his nickname. 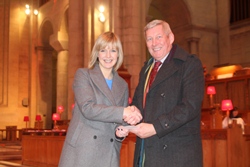 “Under current financial circumstances this is a wonderful result and recognises the great generosity of the people of Belfast and Northern Ireland.”

Dean Mann explained that a proportion of the money raised would be donated to charities working on the ground in the Philippines, which was devastated by Typhoon Haiyan, and in Syria, but the majority would go to local charities.

He thanked the representatives of so many groups for attending the service. “It is a great opportunity for you to come together and for us to collectively thank the givers,” Dean Mann said. “We stand outside for eight days and people are very generous, but they are keen to know where the money is going and this service connects us with the givers and with those working behind the scenes on the Black Santa Appeal and in organising today’s event .” 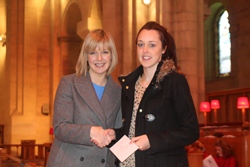 Dean Mann added: “This is one of very few opportunities, perhaps a unique opportunity, for the representatives of 200 charities to come together under one roof and celebrate the work they do, helping tens of thousands of people in our community.”

The cheques were distributed by special guests, the Rev Canon Dr Heather Morris, President of the Methodist Church in Ireland, and BBC TV journalist Tara Mills.

“Today is also a reminder of the tremendous good that you, our local charities, are doing in Northern and the impact you have on so many lives.”